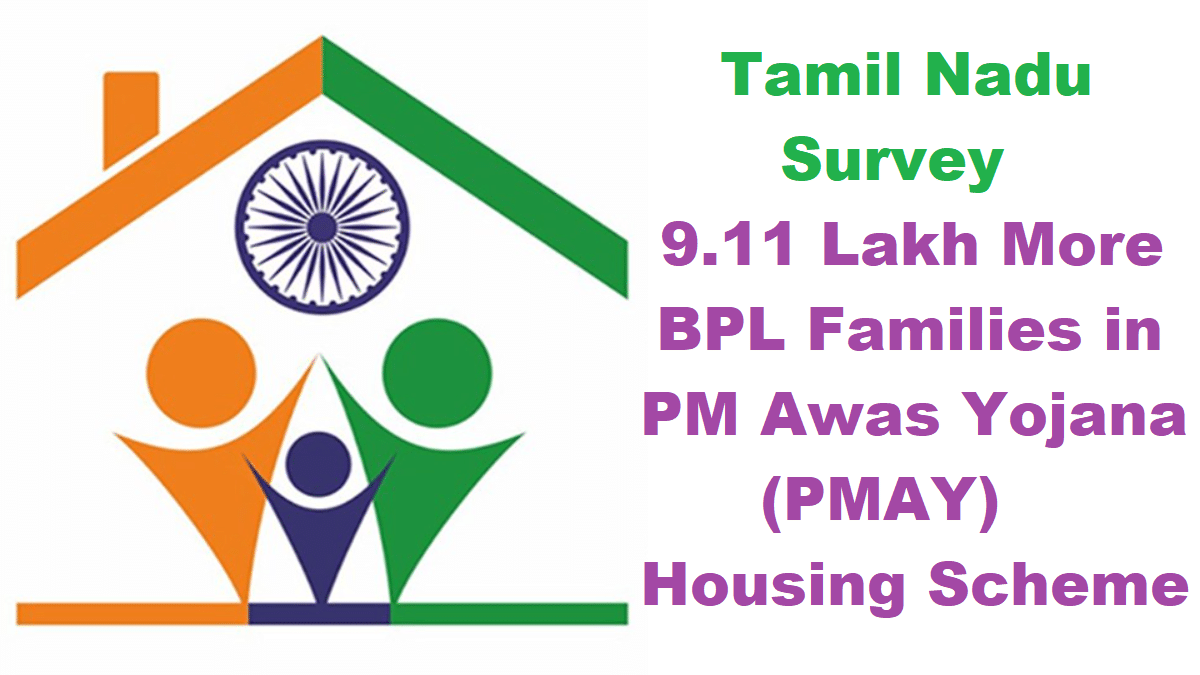 Tamil Nadu government has identified 9.11 lakh more below poverty line (BPL) families after a year-long survey. These BPL households were left out from the socio-economic caste census (SECC) 2011. Now these BPL people would be included in the PM Awas Yojana (PMAY) list to enable them to benefit from centre’s housing scheme.

The Tamil Nadu Survey was conducted by the Rural Development and Panchayati Raj department. This was done after TN govt. obtained consent of central govt. to identify BPL families left out of SECC 2011 census. The state govt. has identified more BPL families in the survey and has uploaded their data on the PM Awas Yojana web portal.

The complete details about the Tamilnadu Survey, identification & inclusion of more BPL families in PMAY housing scheme are provided below.

The state govt. of Tamil Nadu has identified 9.11 lakh more BPL families in the survey and uploaded their data on the web portal of PM Awas Yojana. This data is under scrutiny by the implementing agency of the central govt’s PMAY housing scheme. Since only those families whose name appears in the SECC 2011 data are eligible to benefit in PMAY scheme, these 9.11 lakh households were not considered as beneficiaries.

After the addition of these BPL families in the SECC list, they will automatically be added to the PMAY housing scheme beneficiary list in a phase wise manner. Following the Tamil Nadu govt’s initiative to add left-out BPL families in SECC 2011 census, several other state governments have also taken up such survey.

Benefits of Adding Name in SECC 2011 List for PMAY Housing

Under the PMAY housing scheme, each beneficiary would be extended financial aid to the tune of Rs. 1.20 lakh in 4 stages of construction of the houses. Out of this assistance, 60% of the fund would be allocated by the central government while the state government would sanction the remaining 40% amount. In addition to this, TN govt. will sanction an additional amount of Rs. 50,000 to each beneficiary towards the construction cost and installing solar panels.

The Tamilnadu state govt. also conducted special drive to identify people affected in Gaja cyclone in delta districts, particularly in Thanjavur, Nagapattinam, Pudukottai and Tiruvarur. In this driver, TN govt. has identified 1.12 lakh people, who did not get house pattas. The state govt. has also uploaded their names in the central govt’s Pradhan Mantri Awas Yojana portal.

Tamil Nadu govt. is keen to construct concrete houses to replace all the thatched huts in delta and coastal districts. These pucca houses are necessary to ensure the safety of people during natural disasters in the near future.