AP YSR Cheyutha Scheme 2023 or “Jagananna Cheyutha” is a new scheme launched by the Andhra Pradesh government to provide financial assistance to women in the state. Through this scheme, AP govt. intends to support all women from SC, ST, BC and minority communities. The financial benefit of Rs. 75000 is to be provided over a period of four years (Rs. 18,750 per year) to those women who come under 45 to 60 years of age. Andhra Pradesh govt. has allocated Rs. 4,949 crore in AP Budget 2023 (out of total 17,000 crore) for women welfare scheme named YSR Cheyutha Scheme.

Under AP YSR Cheyutha Scheme 2023, the state govt. will provide Rs. 75,000 to all the women belonging to the SC / ST / BC / Minority community over a period of 4 years. Hence the annual sum of Rs. 18,750 per annum will be provided as the financial assistance to all the eligible women in the state. The scheme is expected to benefit about 26 lakh women across the state through this scheme.

All the poor women who are deprived of various basic facilities can utilize the money given under YSR Cheyutha Scheme and lead a life of dignity and honour. To avail the benefits of AP YSR Cheyutha Yojana, women must be above 45 years of age while the maximum age is 60 years.

YS Jagan Mohan Reddy has launched YSR Cheyutha scheme 3rd phase. For the third year in a row, more than 26 lakh beneficiaries are being provided with YSR Cheyutha. For the current year, Rs. 4,949 crores have been deposited into the accounts of the women. While giving statistics of the welfare schemes in the state, YS Jagan informed that Rs. 14,110 crores have been provided in three years through a Cheyutha, Rs. 19,617 crores to 44.50 lakh people through Amma Vodi, Rs. 12,758 crores to 78.74 lakh people through Asara and Rs. 3,615 crores were given under Sunna Vaddi.

He said that without any corruption and discrimination, cash is directly deposited in the beneficiary’s account at the touch of a button. CM Jagan on the occasion asked women to think about the difference between the previous regime and the current regime.

How to Apply for AP YSR Cheyutha Scheme?

The eligible women who belong to the below-mentioned categories can apply to this scheme through the offline mode only.

NOTE: Graama Sachivaalayam can be contacted by the applicants if any information is required about the scheme.

To check your beneficiary list you will have to follow the step by step procedure mentioned below:-

STEP 1: First of all, you have to go to the official website at https://navasakam2.apcfss.in/

STEP 2: Or you have to click on the link – https://gramawardsachivalayam.ap.gov.in/GSWSDASHBOARD/#!/CheyuthaDashboard

STEP 3: Here click at the link under District Name to open the District Level YSR Cheyutha Scheme List of Beneficiaries

STEP 4: Then hit at the link under Mandal to open Mandal Level Cheyutha beneficiaries list as shown below:-

STEP 5: Then hit at the link under Secretariat to open the Details level Cheyutha Beneficiaries List Dashboard as shown below:-

STEP 6: Then the final list of all eligible beneficiaries of YSR Cheyutha Scheme would get displayed on your screen:-

Procedure to Know Your Secretariat

8 lakh widows and single women in the age group between 45 and 60 years, who are already receiving monthly social pensions, would also be able to take the benefits of YSR Cheyutha. “The annual amount received by women eligible for pension is Rs. 27,000 at the rate of Rs. 2,250 per month. In addition to it, they would receive Rs. 18,750 per annum under YSR Cheyutha. The total amount comes to Rs  45,750 per annum. Women beneficiaries of the scheme are free to use the amount received anywhere / anyhow they wish to.

All the candidates can check the AP YSR Cheyutha Scheme Status on their registered mobile phone numbers. As soon as the installment is received in the bank account of eligible beneficiaries, you will get an SMS on the registered mobile number as shown here:-

CM Jagan promises all the women to realize the dream of Y.S. Rajashekhara Reddy to turn “women into lakhiers” under YSR Cheyutha Scheme in Andhra Pradesh. The amount of Rs. 75,000 (for 4 years) would be released in 4 equal installments through the respective corporations. All the eligible women under the YSR Cheyutha Scheme would be provided with pension amount starting from the age of 45 itself.

Under the first phase of YSR Cheyutha Scheme, the government has provided financial assistance of Rs. 18,750 to around 21,00,189 beneficiaries which amount to 3,937.90 crores. As the second instalment of YSR Cheyutha scheme on 13th November 2020, the AP govt. had released Rs. 510 crore for 2.72 lakh beneficiaries. The state government has already transferred financial assistance of Rs. 18,750 accounts of each of 23,72,189 beneficiaries amounting to Rs. 4447.90 crore in 1st / 2nd Phase.

✔️ What is YSR Cheyutha Scheme

✔️ How to Apply for YSR Cheyutha Scheme

Beneficiaries can apply for YSR Cheyutha scheme at Graama Sachivaalayam.

✔️ What is the financial assistance amount under the cheyutha scheme

The state government would provide a financial amount of 18,750 to eligible women beneficiaries for 4 years

✔️ Who is eligible for YSR Cheyutha Scheme

Andhra Pradesh resident women belonging to SC / ST / BC or Minority community and between the age of 45 years to 60 years are eligible under the scheme.

✔️ What is the launch date of YSR Cheyutha Scheme

Andhra Pradesh YSRCP govt. headed by CM Jagan has also started various other schemes under YSR Navaratnalu for state residents which are as follows:

1. YSR Rythu Bharosa Scheme – This scheme for farmers in AP was launched on 15 October 2019. All the farmers to get Rs. 13,500 per annum under this investment support scheme.
2. YSR Arogyasri Scheme – Universal Health coverage to all lower and middle class families whose annual income is less than Rs. 5 lakh. All the expenses above Rs. 1,000 to be borne by the AP state govt.
3. YSR Pension Kanuka Scheme – Old Age Pension (OAP), Widow, Weavers, Toddy Tappers, Fishermen, Single women, PLHIV (Art pensions), traditional cobblers pension amount raised to Rs. 2250. Disability pension is now Rs. 3,000. CKDU / Dialysis pension raised to Rs. 10,000 and the age of old age pensioners is reduced from 65 to 60 years. 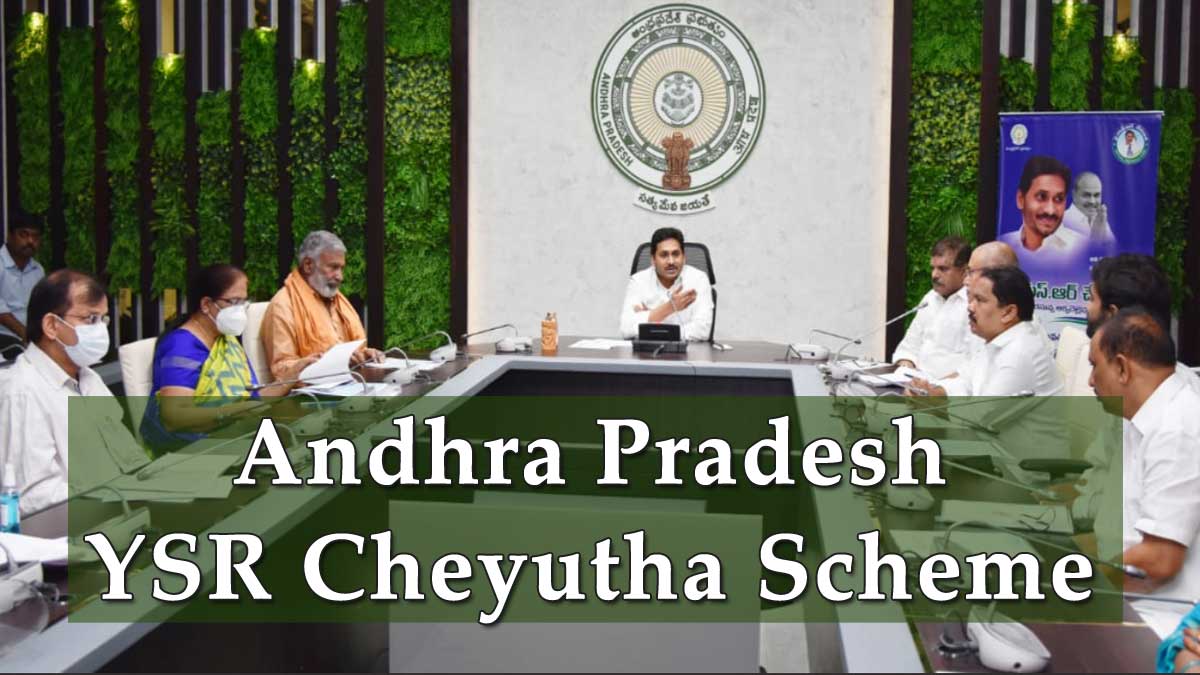