People would be able to check their name in the 2nd phase AP Rythu Bharosa Scheme List of beneficiaries at official website ysrryhtubharosa.ap.gov.in. Last year also, first installment was transferred in the month of May, second installment was transferred in October while third installment in January 2022. The YSR Rythu Bharosa Scheme registration process is still ongoing and the new beneficiaries would be included in the final list.

All the applicants who have previously applied online for assistance can now check their name in the Rythu Bharosa district wise beneficiary list 2022. CM has provided 2nd installment to the AP YSR Rythu Bharosa – PM Kisan beneficiaries for the FY 2022-23 on 17 October 2022. As part of the scheme, the state government has been crediting the amount in three installments to suit the farmer’s needs where Rs. 7,500 will be deposited in May (Kharif) and Rs. 4,000 will be credited in October (Rabi) while Rs. 2,000 will be given in the month of January during Sankranti aggregating to Rs. 13,500 per annum. Although it was promised to provide Rs 12,500 annually during elections, the amount has been increased to Rs. 13500 gradually.

On 17 October 2022, a total of 50.92 lakh farmers across the state gets a second installment of Rythu Bharosa, amounting to Rs. 2,096.04 crore. The state government implemented the YSR Rythu Bharosa – PM Kisan for the fourth consecutive year. Every year, under the Rythu Bharosa scheme, a sum of Rs. 13,500 is offered in three installments. In addition to the farmers who are cultivating their own land, the eligible SC, ST, BC, minority, tenant farmers, ROFR forest and Devadaya (endowment) farmers in AP are also getting Rs. 13500 per head.

How to Check AP YSR Rythu Bharosa List of Beneficiaries

STEP 2: Now the registered officer can enter the mobile number, password, captcha and click at ‘Login‘ button as shown below:-

STEP 4: Afterwards, the page would be displayed containing information about eligible beneficiaries. This info. includes name of beneficiary, father name and Katha number. As per the officer registration, district, village and mandal details would be displayed as shown below:-

STEP 5: Then check the process on how to search beneficiary with katha number in the user manual.

Here is the process to know your AP YSR Rythu Bharosa Scheme Status for 2nd installment for FY 2022-23:-

STEP 2: At the homepage, click at the “Know Your RythuBharosa Status” link present in the main menu under ‘Know your status’ section.

STEP 3: Then the AP YSR Rythu Bharosa Phase 2 Payment Status page will appear as shown below:-

STEP 4: Here applicants can enter the Aadhar Number and click at the “Submit” button to check your phase 2 payment status of AP YSR Rythu Bharosa Scheme.

STEP 2: At the homepage, click at the “Know Your Grievance Status” link present in the main menu under ‘Know your status’ section.

STEP 3: Then the page to check AP YSR Rythu Bharosa Grievance Status will appear as shown below:-

The district wise data for AP YSR Rythu Bharosa Scheme is now available. People can now check the total number of Kathas submitted to AEO / MPEO and Kathas Verified by MAO. This complete information is available through the link given here – https://ysrrythubharosa.ap.gov.in/RBApp/index.html

The entire list of farmers on a district wise basis can be checked here as shown below:-

Andhra Pradesh government had launched AP YSR Rythu Bharosa Scheme 2022 as a welfare scheme for farmers. Chief Minister Y.S. Jagan Mohan Reddy has cancelled the previously running Annadata Sukhibhava Scheme of the TDP government. Under the new Rythu Bharosa Yojana in AP, all the farmers will get an investment support amount of Rs. 13,500 per annum (Rs. 7500 from AP govt. + Rs. 6,000 under PM Kisan Samman Nidhi Yojana).

The YSR Rythu Bharosa scheme was launched at the 70th birth anniversary of YS Rajasekhar Reddy where a cheque of Rs. 7.50 lakh was handed over to the widow of a farmer who ended his life in 2015 due to unpaid loans. The scheme was a part of the election manifesto of YSRCP and as promised, the scheme was successfully launched in June 2019. However, the implementation was started on 15th October 2019. The state govt. will ensure that each farmer gets minimum support price of their crops.

To avail assistance of Rs. 13,500 per year, farmer will have to follow the conditions mentioned in the YSR Rythu Bharosa Scheme Guidelines. Under this scheme, there is no restriction on land holdings by land-owner families. However, the minimum area requirement which is to be taken on lease by a single individual landless tenant farmer is different:-

People must also check the list of exclusion categories so as to avail benefits of YSR Rythu Bharosa Scheme.

Here are the complete details of exclusion categories for AP YSR Rythu Bharosa Scheme. Any person in the following categories of higher economic status shall not be eligible for scheme benefits:-

Any person finding any difficulty regarding YSR Rythu Bharosa Scheme in AP can dial toll free nubers 1100 or 1902 to raise grievance. Previous scheme of the TDP govt. namely Annadata Sukhibhava has been scrapped in which govt. announced to provide Rs. 15,000 per annum to farmers. The scheme is continuously being implemented since 15 October 2019.

The important features and highlights of YSR Rythu Bharosa Scheme are as follows:-

For more details, visit the official website at ysrrythubharosa.ap.gov.in 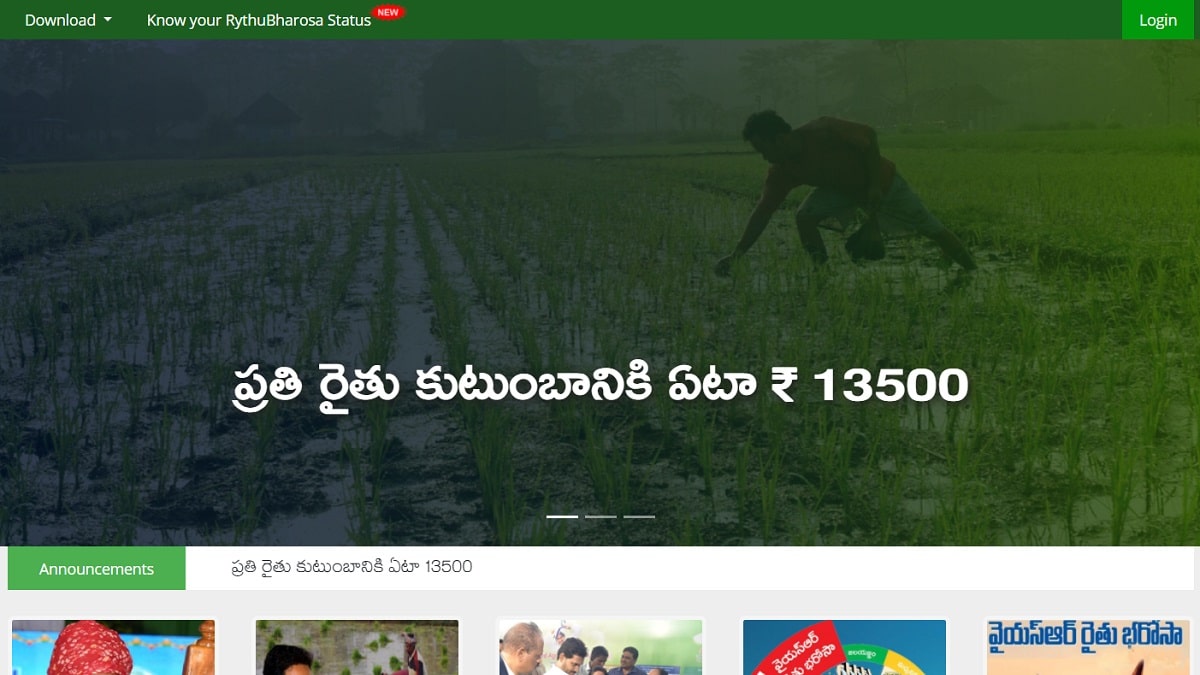