Pradhan Mantri Ujjwala Yojana 2.0 has been launched by the central government. PMUY is a new social welfare scheme for free distribution of LPG connection to BPL households across the country. Pradhan Mantri Ujjwala Yojana application forms are available at the LPG outlets or the distribution centers across the country. The prescribed PMUY KYC application form can be downloaded in Hindi and English language in PDF format.

PMUY Beneficiaries to Get Rs. 200 Subsidy on LPG Cylinders

Good news for PM Ujjwala Yojana beneficiaries! Centre announces subsidy of Rs. 200 per gas cylinder. Union Finance Minister Nirmala Sitharaman on 21 May 2022 (Saturday) announced that the central govt. will give a subsidy of Rs. 200 per gas cylinder (upto 12 cylinders) to over 9 crore beneficiaries of Pradhan Mantri Ujjwala Yojana this year.The move will have a revenue implication of around Rs 6100 crore a year, the finance minister said.

FM Sitharaman made a slew of announcements for the welfare of the poor on 21 May 2022. She said, “We are committed to ensure that prices of essential items are kept under control.” Further, the minister said that despite the challenging international situation, we’ve ensured that there are no shortages/scarcity of essential goods. Even a few developed countries couldn’t escape some shortages/disruptions.

“Our government is devoted to the welfare of the poor. We’ve taken a number of steps to help the poor and middle class. As a result, the average inflation during our tenure has remained lower than during previous governments,” Sitharaman stated in a series of tweets.

PM Narendra Modi has launched Pradhan Mantri Ujjwala Yojana 2.0 on 10 August 2021 fro Mahoba in Uttar Pradesh. The central govt. has started PMUY Second Phase in order to provide free LPG gas cylinders and refill to poor people. In Ujjwala 2.0 scheme, migrant workers can also get LPG connections through self-declaration as “proof of address”. Migrants will not be required to submit ration cards or address proof. A self-declaration for both ‘family declaration’ and as a ‘proof of address’ will suffice.

Along with a deposit-free LPG connection, Ujjwala 2.0 is aimed at providing the first refill and hotplate free of cost to the beneficiaries.The Ujjwala 1.0 scheme was launched in 2016 and under this, a target was set to provide LPG connections to five crore women members of below poverty line (BPL) households. Subsequently, the scheme was expanded in April 2018 to include women beneficiaries from seven more categories (SC/ST, PMAY, AAY, Most backward classes, tea garden, forest dwellers, Islands).The target was also revised to eight crores LPG connections, which was reached in August 2019, seven months ahead of the target date.

STEP 2: At the homepage, click at the “Apply for New Ujjwala 2.0 Connection” link present in the header as shown below:-

STEP 4: Then the page to check documents required, eligibility criteria to avail connection under Ujjwala 2.0 will open as shown below:-

STEP 5: Next the page to fill online application for Indane, Bharatgas, HP gas will open:-

STEP 6: Hit at the link – “Click Here to Apply” in front of the selected brand name, then the apply online page for new LPG gas connection will open where you can enter all the details accurately to complete PMUY 2.0 registration process.

Only the women candidate from the poor BPL households is eligible to apply for the scheme. The identification of the eligible BPL households will be done on the basis of SECC – 2011 (Rural) database. The identification of BPL candidates in urban areas will be done on the basis of more factors. The interested candidates can apply for the PM Ujjwala Yojana by filling up the application form (in prescribed format) and submitting at the nearest LPG outlet/distribution center.

The scheme provides a financial support of Rs 1600 for each LPG connection to the BPL households. The central government has distributed PM Ujjwala Yojana Connections to more then 8.2 crore BPL families till January 2021. This is the first ever welfare scheme by the Ministry of Petroleum and Natural Gas which would benefit crores of women belonging to the poorest households.

The government aims to not just distribute free LPG connections but also reduce the serious health hazards associated with cooking based on fossil fuels. The objective of the scheme is to empower women and protect their health. The scheme is also expected to provide employment to rural youth in supply chain of the cooking gas.

How to Apply for Pradhan Mantri Ujjwala Yojana

There was provision of applying online for the PM Ujjwala Yojana at pmuy.gov.in which is stopped now till further directions.

Basic eligibility criteria for the Ujjwala Yojana is as following

There are certain documents required to be attached with the PMUY application form as below.

It is not necessary to submit all the above said documents but some of those which can verify your permanent residence address and you as a BPL candidate.

According to the decision, women from the BPL family who wishes to avail free LPG connection under the Ujjwala Yojana will have to furnish a proof of Aadhar card and will have to undergo the Aadhar authentication. The government has also asked the state owned fuel retailing firms to arrange the enrollment of scheme beneficiaries for Aadhar number. The women beneficiaries who still do not have Aadhar card can apply for the same.

All the applicants can check whether they are eligible beneficiary of PM Ujjwala or not by simply checking their name in the BPL list. It is important to note that BPL list is not a standalone list created by central government or any other agency. Rather, it is the Socio Economic Caste Census Data (SECC) 2011 report. As only BPL candidates are eligible for PMUY Scheme, people can find out either their name appears in the SECC-2011 List or not which can be checked using the link given here –

Only those candidates whose name is present in the Pradhan Mantri Ujjwala Yojana Beneficiary List can apply for the scheme benefits.

PMUY Scheme has been officially launched by the Prime Minister Shri Narendra Modi at Ballia in Uttar Pradesh. The Pradhan Mantri Ujjwala Yojana Launch Date is 1 May 2016. On the other hand, Ministry of Petroleum and Natural Gas has also released the guidelines of Pradhan Mantri Ujjwala Yojana. The guidelines are related to the distribution of the free LPG connections by oil marketing companies to the women belonging to the BPL households in the country. Below is the abstract of the PMUY guidelines

1. Short title
The Scheme for providing free LPG connections by Oil Marketing Companies (OMCs) to the women belonging to the Below Poverty Line (BPL) households shall be called Pradhan Mantri Ujjwala Yojana. The Scheme will cover 5 crore BPL households over a period of three years.

2. Commencement
The PMUY scheme will come into force from 1st April, 2016.

3. Objective
Availability of clean cooking fuel is a major challenge for rural poor households in the country. Lack of access to clean fuel is adversely affecting the health of particularly women and children in the households using unclean fuel. Government is committed to providing clean fuel to all poor households. Therefore, the Union Budget 2016-17 allocated Rs. 2000 crore to provide free LPG connections to 1.5 crore women belonging to the below power line (BPL) families during the year 2016-17.

4. Definitions
(a) BPL is a person/ household who suffers from at least one deprivation under the SECC – 2011 (Rural) Database. For identifying urban poor, separate instructions would be issued;
(b) Release of LPG connection : LPG connection under this Scheme shall be released in the name of the women belonging to the BPL family.
(c) Cash Assistance – This will cover the initial cost of Rs. 1600/- for providing a connection and this cash assistance would be provided by the Government for each new LPG connection.
(d) SECC – refers to the Socio-Economic Caste census exercise initiated in the year 2011. This exercise was undertaken in a transparent manner by the State Governments and the Ministry of Rural Development, before the SECC database was finalized.

5. Selection of Beneficiaries
While the selection of beneficiaries would be from the BPL families only, preference would be given to SC/ ST and weaker sections of society., While providing the new connections to BPL households, priority would be given to the States which have lower LPG coverage (compared to the national average) as on 1st Jan, 2016.

6. Implementation Modalities of the Scheme would be as follows:-

The complete document of PMUY scheme Guidelines can be downloaded from the official website of Ministry of Petroleum and Natural Gas.

Other Beneficiaries of PMUY Scheme

Initially, the main beneficiaries of the scheme are women belonging to poor families not having an LPG connection in the household. Now the following categories are also covered under the scheme by the Government along with the List of beneficiaries in the SECC 2011 list:-

The benefit of the scheme has been extended to people residing in Hilly states, including North-Eastern (NE) states by treating them as ‘priority states’.

PMUY Assam Launch Date is 13 May 2017. To check the PM Ujjwala Yojana Status in Assam, click the link – https://fcsca.assam.gov.in/schemes/pradhan-mantri-ujjwala-yojna-pmyu

PMUY Telangana Launch Date is 14 April 2018. Audit Report of PMUY in Telangana can be checked using the link – https://saiindia.gov.in/ag/telangana/en/audit-report/details/55961

PMUY Tripura Launch Date is September 2017. Audit Report of PMUY in Tripura can be checked using the link – https://saiindia.gov.in/ag/tripura/en/audit-report/details/55961

Pradhan Mantri Ujjwala Yojana Chhattisgarh Launch Date is 14 August 2016. To get details about the scheme in CG state, click the link – http://khadya.cg.nic.in/pdsonline/pmuy/

Pradhan Mantri Ujjwala Yojana in Gujarat was launched on 15 May 2016 by the then BJP Chie Amit Shah and Oil Minister Dharmendra Pradhan. The launch event of the scheme had taken place in tribal-dominated Dahod district in central Gujarat. In Gujarat alone, 4.40 Lakh people have chosen to give up the LPG subsidy after the appeal made by PM Narendra Modi. Dahod district had the lowest percentage of LPG connections across the state, hence it has been selected for the launch ceremony of the Ujjwala Yojana.

PMUY had been launched in Madhya Pradesh by the Chief Minister of Madhya Pradesh at Shahdol on 5 July 2016 in the presence of Shri Dharmendra Pradhan, Minister of State (Independent Charge), Ministry of Petroleum and Natural Gas. At the event in Shahdol, the launch of PMUY was marked by distributing the LPG connections to women from BPL families.

Pradhan Mantri Ujjwala Yojana in Bihar had been launched on 27 June 2016 by Petroleum and Natural Gas minister Dharmendra Pradhan.

Complete information of PM Ujjwala Yojana in Hindi such as application procedure, how to apply, application forms, eligibility criteria and more. 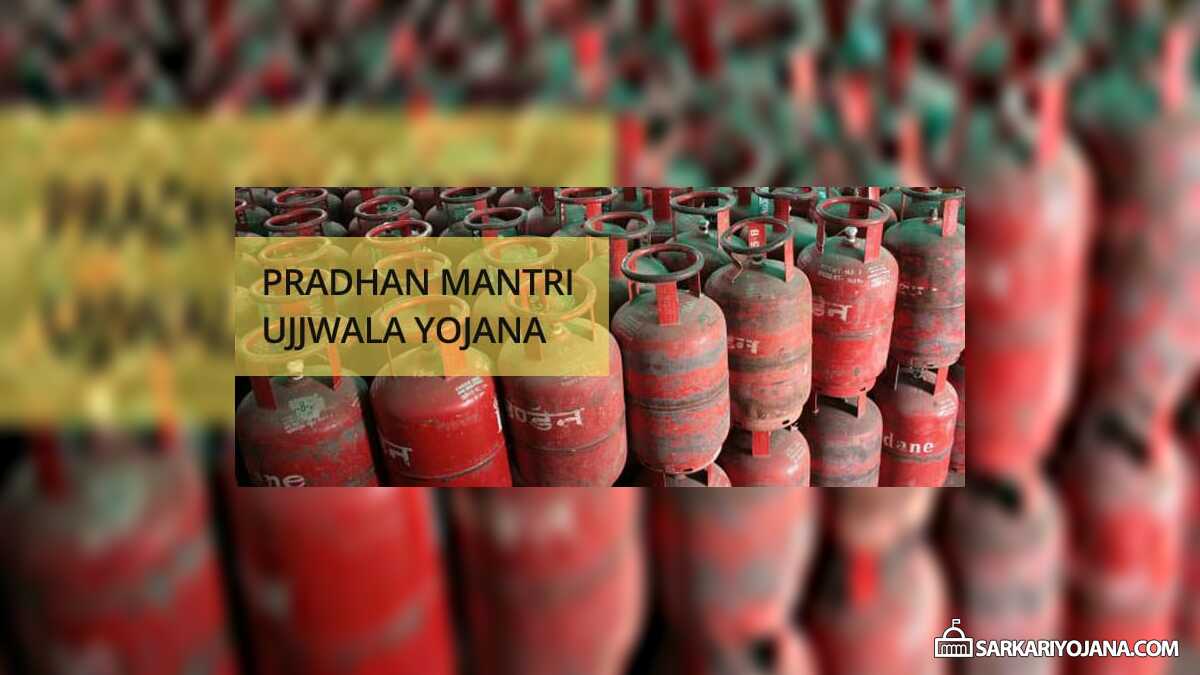