Yuva Mentoring Young Authors Scheme launched: The launch of YUVA 2.0 is in line with the PM Modi’s vision to encourage the youth to understand and appreciate India’s democracy. Ministry of education on 2nd Oct 2022 launched the Young, Upcoming and Versatile Authors scheme. In this article, we will tell you about the version 2 of the earlier PM Mentoring Yuva Scheme 2023. Also you can check the list of previous years selected candidates (authors) which was released last year i.e in the year 2021.

PM YUVA 2.0 Scheme aims to mentor and provide training to young and budding authors below the age of 30 years. PM Mentoring Yuva Scheme 2023 aims to promote reading, writing and book culture in the country and project India and Indian writings globally. YUVA Version 2 scheme is a part of India at 75 project (Azadi ka Amrit Mahotsav) to carry forward the perspectives of young generations of writers on the theme of “Democracy (institutions, events, people, constitutional values past, present, future)” in an innovative and creative manner.

PM Mentoring Yuva Scheme 2023 will help in development of a stream of writers who can write on a spectrum of subjects to promote Indian heritage, culture and knowledge system. Ministry of education launched the YUVA 2.0 scheme in view of the significant impact of the first edition of the Prime Minister’s YUVA scheme. The first edition witnessed a large-scale participation from young authors in 22 different Indian languages including English.

Ministry of Education stated that “India tops the chart in youth population being 66% of the total, waiting to be tapped for capacity building and thereby nation building. With the purpose of mentoring a new generation of young creative writers, there is an imminent requirement to take initiatives at the highest level, and in this context, YUVA 2.0 will go a long way in laying the foundation of the future leaders of the creative world”.

National Book Trust of India will be the implementing agency under MoE which would ensure the phase-wise execution of the scheme under well-defined stages of mentorship. The books prepared under PM Mentoring Yuva Scheme 2022 will be published by National Book Trust, India and will also be translated into other Indian languages ensuring the exchange of culture and literature, thereby promoting “Ek Bharat Shreshtha Bharat”.

Young authors selected under PM Yuva 2.0 scheme will interact with some of the best authors in the world, participate in literary festivals and more. PM Mentoring Yuva 2 Scheme will help in developing a stream of writers who can cover the past, present and future of various aspects of democracy in India. Additionally, it will also provide a window for aspiring youths to express themselves and present a broader vision of Indian democratic values at domestic as well as international platforms.

Concept of PM Yuva 2.0 scheme is to groom the next generation of young authors to create ambassadors of Indian literature. India ranks 3rd in the field of book publishing and possesses a wealth of indigenous literature, India should present it at the global level.

PM Mentoring Yuva Scheme 2023 results were announced in December 2021 by the central government headed by PM Narendra Modi. This scheme aims to empower youths and create learning ecosystem to prepare young learners for leadership roles in future. 75 contestants were selected in Prime Minister’s Scheme For Mentoring Young Authors who had earlier submited a manuscript of 5,000 words to judge its suitability to develop as a proper book.

Here is the list of 75 authors selected under PM YUVA Mentorship Scheme. Each selected author will receive scholarship worth Rs. 50000 per month for a period of 6 months.

National Book Trust (NBT) had announced the results of the All India Contest organised on the theme “National Movement of India” under the PM YUVA Mentorship Scheme 1.0 as part of Azadi Ka Amrit Mahotsav programmes. As many as 75 authors under the age of 30 were selected through the contest for a scholarship-cum-mentorship scheme. Out of the 75 selected authors, 38 were males and 37 were females. Further, two were below 15 years, whereas there were 16 authors in the age group of 15-20 years, 32 fell in the age group of 21-25 years, and 25 authors were in the age group of 26-30 years.

During the mentorship, the selected authors received a scholarship of Rs 50,000 per month for a period of six months. Further, a royalty of 10 per cent was payable to authors on successful publications of their books. The selected authors undergo six months of mentorship in which they were provided with research and editorial support under the guidance of eminent authors and the editorial team of National Book Trust, India.

Thereafter, they developed their book proposals as full-fledged books which were to be published by the trust as part of Azadi Ka Amrit Mahotsav initiatives. Their published books had been later translated into other Indian languages as well.

The contest was organised from June 1 to July 31 through MyGov and NBT platforms. Nearly 16,000 entries in 22 official languages and English were received from all across the country including some from Indian diaspora community. All the book proposals were read by multiple panels of experts and went through three layers of scrutiny.

During his Mann Ki Baat address dated January 31, Prime Minister Shri Narendra Modi had stated, “I call upon our young friends to write about our freedom fighters, events associated with them and tales of valour during freedom struggle from their areas.” Following which the PM-YUVA mentorship scheme for young authors was launched by the ministry of education, the government of India with NBT as the implementing agency.

PM Mentoring Yuva Scheme aims to create a pool of authors of below 30 years who are ready to express themselves and project India on any international platform, as well as it will help in projecting Indian culture and literature globally. The young authors so mentored will become proficient in writing in various genres like fiction, non-fiction, travelogues, memoirs, drama, poetry & so on.

PM Yuva Mentorship Scheme will make sure to bring reading and authorship as a preferred profession at par with other job options, making the children of India take reading and knowledge as an integral part of their grooming up years. In addition, PM Mentoring Yuva Scheme will bring a positive psychological push to the young minds given the impact and effect of the recent pandemic on the mental health of children.

The National Book Trust, India (under BP Division, Ministry of Education, GOI) is the Implementing Agency which will ensure phase-wise execution of the Scheme under well-defined stages of mentorship

Selection Procedure of Young Authors for the Year 2021

Under the dynamic leadership of PM Narendra Modi, the National Education Policy (NEP 2020) lays emphasis on empowerment of young minds and creation of learning ecosystem that can nurture young learners for future leadership roles. To achieve this goal as well as to celebrate India’s 75 years of Independence, a national PM Mentoring Yuva Scheme is launched. Prime Minister’s Scheme For Mentoring Young Authors will go a long way in cementing the foundation of these leaders of tomorrow.

India tops the world chart in the youth population and has a lot of potential ready to be tapped into and utilized for capacity and nation-building. Demographic advantage offers India and its economy an unprecedented edge. With this express intent of mentoring a new generation of young creative writers, there is an imminent requirement to take initiatives at the highest level. These initiative are taken under the visionary national level flagship programme of Ek Bharat Shreshtha Bharat.

Essentially, PM Mentoring Yuva Scheme envisions cultivating modern ambassadors of Indian literature. India is ranked 3rd in the arena of book publishing and to further boost this treasure trove of indigenous literature, it is imperative to project this at the global stage. PM Mentoring Yuva Scheme will help to develop a stream of writers who can write on a spectrum of subjects to promote Indian heritage, culture and knowledge and provide a window to the aspiring youth to articulate themselves in their mother tongue and represent India at an international level. PM Yuva Yojana is in line with Hon’ble PM’s vision of Global Citizen and establish India as a Vishwa Guru.

What was the duration of the PM Mentoring Yuva Scheme 1.0 Contest

Till what time the submissions for Yuva 1.0 were accepted

Was the option to write in any Indian language available in Yuva Scheme 1.0

Who was eligible to participate in the Yuva 1.0 contest

Were foreign nationals also eligible to participate in the Yuva scheme 1.0 contest

Only Indian nationals including those holding PIOs or NRIs holding Indian passports were allowed to participate in the contest.

Yes, you had to attach a copy of your passport/PIO card with your entry

Only one entry per contestant was allowed

What was be the structure of the entry

The structure included chapter plan, synopsis and two-three chapters (if the entry has chapters) within a maximum word limit of 5000 words

No minimum age was prescribed

What was the genre of entry

Applicants were given the choice to submit both fiction and non-fiction.

No, poetry was not accepted

What was the format of submission in PM Mentoring Yuva Scheme

For more details, visit the official website at https://innovateindia.mygov.in/yuva/ 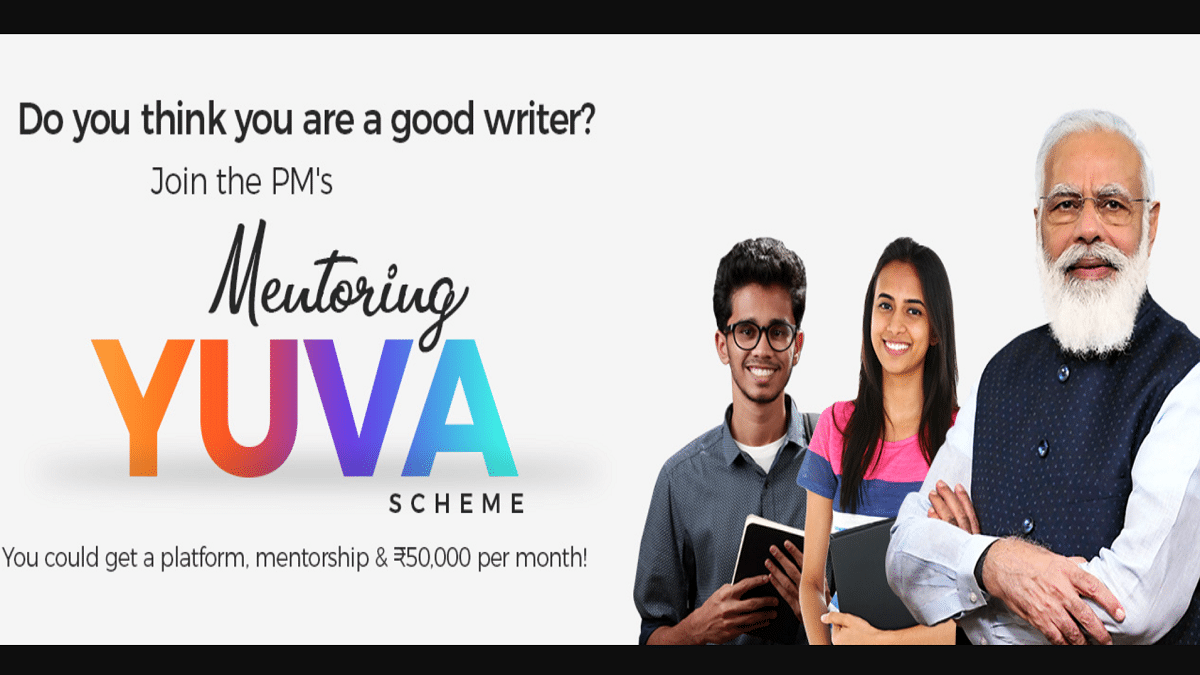