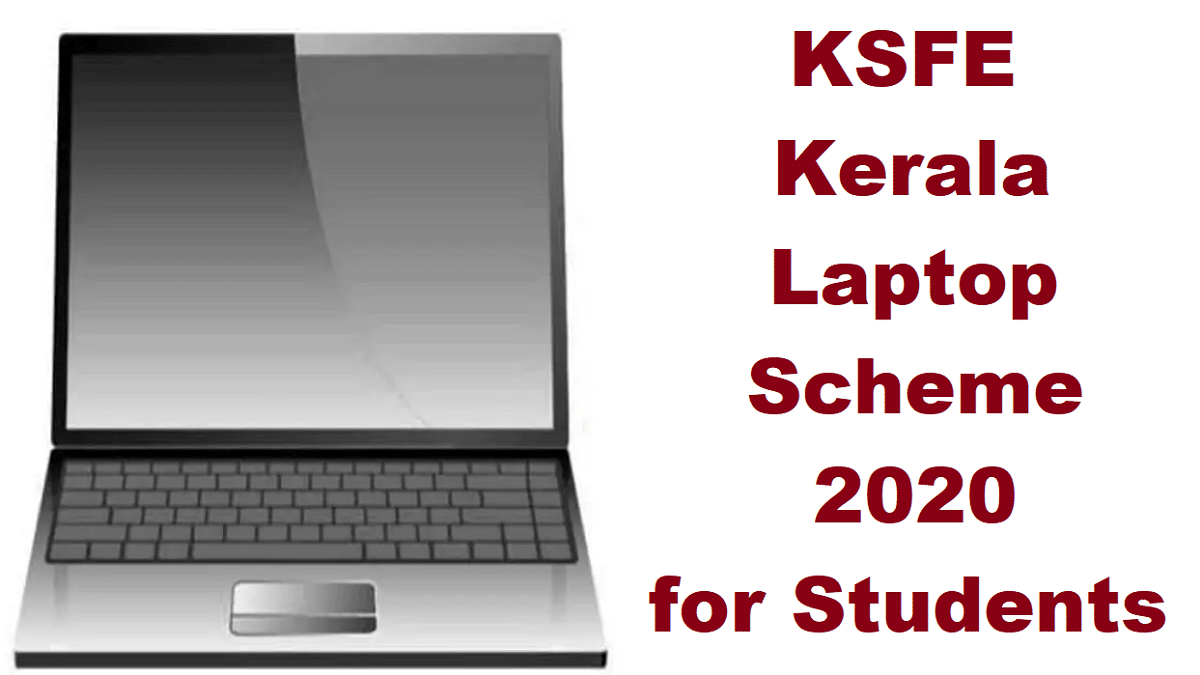 Kerala government is going to start KSFE Vidyashree Laptop Scheme 2020 for students from financially weaker sections to bridge digital divide in the state. Finance Minister T M Thomas Isaac has announced a joint venture b/w Kerala State Financial Enterprises (KSFE) and Kudumbasree on 23 June 2020. There would be a micro-finance scheme to fund students for purchasing laptops. In this scheme, govt. will provide laptops worth Rs. 15,000 to poor students at an easy installment of Rs. 500 p.m for 30 months.

The KSFE will also fund local bodies 75% of expenses to setup online study classes for weaker sections provided the respective local bodies are willing to spend remaining 25%. Other initiatives like Kerala Fibre Optic Network (K-Fone) Free Internet Scheme for below poverty line (BPL) families would be launched by December 2020.

Around 40 lakh Kudumbashree workers in Kerala can join KSFE Chit Fund Scheme. After 3 months on payment of Rs. 500 monthly installment, the workers will be provided laptops.

KSFE will start a savings scheme of Rs. 15,000 where students can deposit Rs. 500 for 3 months. Students joining the scheme and successfully paying Rs. 500 for 3 months will be given laptops worth Rs. 15,000 as loan by KSFE. While the govt. will bear 5% of the loan interest, the KSFE will bear 4%. The government will try to provide subsidies from various departments, govt. agencies and social organisations for the students procuring laptop through the scheme. The Finance Minister of Kerala has announced to start new initiatives to promote online education learning. These initiatives are as follows:-

The state govt. of Kerala will roll-out Kerala Fibre Optic Network (K-Fone) Scheme by December 2020. In this project, govt. will provide free internet to 20 lakh BPL families with an outlay of Rs. 1500 crore. High speed internet connection facility would be provided to financially weaker families absolutely free of cost. Moreover, those families who does not fall in BPL category will get Net connectivity at affordable rates. K-FON project will give a push to the digitalisation of government services like the e-health programme. IT parks, airports and seaports would also be benefited from the linkage.

All the licenced internet service providers (ISPs) and cable TV operators can utilize Fibre Optic Network to provide services to its citizens. In K-Fone project, internet connectivity would be provided to hospitals, schools, government offices and other institutions. K-FON scheme will provide major gains in the Artificial Intelligence, Blockchain, Internet of Things and startup domains sectors. Around 30,000 govt. offices and educational institutions would be linked through the high speed network.

Several small scale enterprises which makes use of e-commerce platforms stand to gain from K-FON Scheme. High quality video conferencing and transport management are other significant advantages of this scheme. The K-Fon fibre optic network will also link all mobile towers in the State for better mobile Internet services. The state govt. of Kerala will partner with leading private ISPs for providing seamless bandwidth connectivity.

Kerala Fibre Optic Network (K-FON) Scheme will prove very beneficial for poor citizens. Lower class people are not able to get internet services as cost of internet pack per month is high for them. Now the state govt. will provide high speed and high quality internet connection free to poor BPL people and affordable prices for others.

Chief Minister also mentioned that Kerala is the only state in the country which has declared internet as fundamental right to its citizens. The K-Fone project has been implemented by Kerala State IT Infrastructure Limited and Kerala State Electricity Board. Optical fibre cables were laid across the state using KSEB posts. Kerala Fibre Optic Network Scheme will act as catalyst for the knowledge-based economy envisioned by the state.

As the importance and relevance of the internet will grow in the post-COVID-19 scenario, usage of internet in banking and education sectors will greatly increase. K-FON project will provide major support to the government’s efforts to develop Kerala as the world’s leading educational, industrial, and tourism destination.