Kerala KSFE Laptop Scheme or KSFE Vidyashree Scheme 2023 is a new scheme launched by state government of Kerala to provide laptops to the students belonging to weaker section of the society or the Kudumbashree members. The scheme is launched to ensure online education for students. KSFE Vidyashree Laptop Scheme 2023 by Kerala government is a micro-finance scheme to fund students for purchasing laptops. Under this scheme, govt. will provide laptops worth Rs. 15,000 to poor students at an easy installment of Rs. 500 p.m for 30 months.

The KSFE laptop scheme will help about 2.65 lakh students in the state who lack adequate facilities to access the online educational programme. A majority of these children are likely to be from the homes of Kudumbashree members.

KSFE laptop scheme is a part of KSFE (Kerala State Financial Enterprises) Chit Fund Scheme which is already running in the state. After 3 months on payment of Rs. 500 monthly installment, the scheme members will be provided laptops or if they wish, they can withdraw their money from 13th month of the onset of the scheme.

Of the 43 lakh school children in the State, around 2.65 lakh lack adequate facilities to access the online educational programme. A majority of these children are likely to be from the homes of Kudumbashree members. In this context, Kerala State Financial Enterprises (KSFE) has proposed a scheme where it can collaborate with Kudumbashree to implement a Microcredit Scheme- KSFE Vidyashree Scheme to support member families to avail Laptops to ensure online education to their children. The investment will be useful as children can continue to use the online educational platform beyond the tenure of COVID 19 pandemic, once the schools start working too.

How to Apply for KSFE Laptop Scheme 2023

KSFE will start a savings scheme of Rs. 15,000 where students can deposit Rs. 500 for 3 months. Students joining the scheme and successfully paying Rs. 500 for 3 months will be given laptops worth by KSFE. The laptops will be procured from the agencies empaneled by KSFE to provide Laptop at a concessional rate. A member who joins the KSFE Laptop Scheme will get Rs. 14,250/- after deducting the commission.

The dully filled KSFE Vidyashree laptop scheme application form (given below) can be submitted at the KSFE branches. The complete list of KSFE branches is available through this link – https://www.kudumbashree.org/storage//files/jlxqi_circular%20no.39-2020(bd)attachment.pdf

The amount required for the purchase of a laptop out of the deposit of Rs. 14250/- will be made available in advance to the requesting members. The amount after purchasing the laptop in the plan amount will be given to the respective children (members of the chit) at the end of the plan. (Example:- If the laptop provided by the company being empaneled by the State IT Department is Rs. 12900/-, the remaining amount of Rs. 1350/- plus interest will be paid at the end of the plan).

The application form of KSFE Vidyashree scheme or KSFE laptop scheme can be downloaded in the PDF format using the link below.

The state govt. will bear 5% of the loan interest, the KSFE will bear 4% under the scheme. The government will try to provide subsidies from various departments, govt. agencies and social organizations for the students procuring laptop through the scheme. The Finance Minister of Kerala has announced to start new initiatives to promote online education learning. These initiatives are as follows:-

Below are the links of important PDF files of KSFE Vidyashree laptop scheme which contains the detailed information about the scheme. 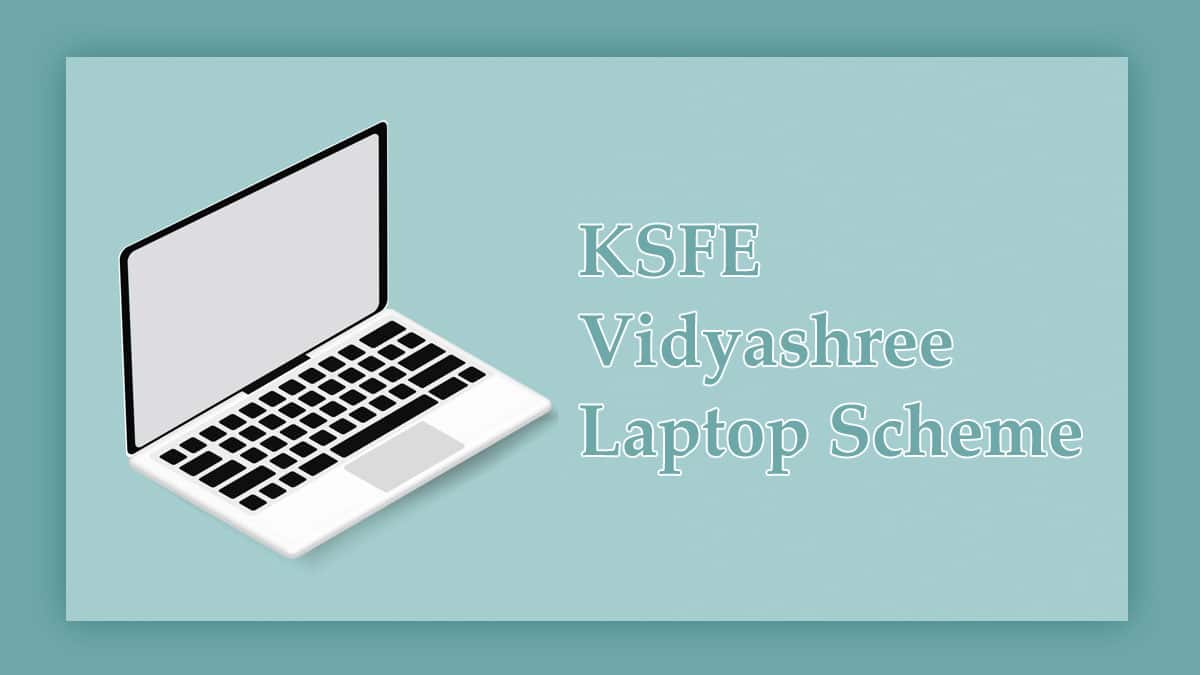