Ministry of Housing and Urban Affairs (MoHUA) has launched Swachh Survekshan 2022. Central govt. has launched this program under Swachh Bharat Mission (SBM) to focus on sustainability of initiatives and also encourage large scale participation of citizens. Swachh Survekshan 2022 Ranking List of states performing better would be released soon. In 2022, Swachh Survekshan state rankings has been announced by President Ram Nath Kovind on 20 November 2021 under the survey to be measured based on their fund utilization and support to respective local bodies.

Every year, Swachh Survekshan is redesigned innovatively to ensure the process becomes more robust with focus on sustaining the behaviour change. This is the 6th edition of the annual cleanliness survey and the exercise this year focuses on wastewater treatment and other parameters. This Swachh Bharat Survey is conducted across all cities and towns across the country. Swachh Survekshan focuses on garbage free and open defecation free cities.

What is Swachh Survekshan 2022

Swachh Survekshan is an annual survey of cleanliness, hygiene and sanitation in cities and towns across India. It was launched as part of the Swachh Bharat Abhiyan, which aimed to make India clean and free of open defecation by 2nd October. The first survey was undertaken in 2016 and covered 73 cities; by 2020 the survey had grown to cover 4242 cities and was said to be the largest cleanliness survey in the world.

In a bid to scale up the coverage of the ranking exercise and encourage towns and cities to actively implement mission initiatives in a timely and innovative manner, Ministry of Housing and Urban Affairs (MoHUA) is now in the process of conducting the sixth edition of the survey to rank all cities under Swachh Bharat Mission-Urban (SBM-U) with Quality Council of India (QCI) as its implementation partner.

The main objectives of conducting Swachh Survekshan survey are as follows:-

MoHUA & QCI will conduct intensive virtual interactions with States and ULBs to familiarize them with various facets of the survey such as survey methodology, survey process and indicators, amongst others, while also clarifying their expectations from the survey.

Here is the ranking list of India’s cleanest cities with regard to population.

Cities Having More than 1 Lakh Population

Cities Having Less than 1 Lakh Population

Swachh Survekshan is an annual survey of cleanliness, hygiene and sanitation in cities and towns across the country. It was launched in 2016 as part of the Centre’s Swachh Bharat Abhiyan, which aims to make India clean and free of open defecation. A total of 4,320 cities were covered in Swachh Survekshan 2021, the sixth edition of the survey, making it the world’s largest urban cleanliness survey.

Here is the ranking list of India’s cleanest states with regard to urban local bodies.

States having more than 100 ULBs

In the latest edition, Chhattisgarh has been ranked as the cleanest state in the country. In terms of cleanest states, the second position in the cleanest states category of the Swachh Survekshan Award 2021 was secured by Maharashtra, followed by Madhya Pradesh (3), Gujarat (4), and Andhra Pradesh (5). These states have more than 100 urban local bodies.

States having less than 100 ULBs

In the category of states with less than 100 urban local bodies, Jharkhand achieved first, followed by Haryana and Goa.

District-wise, Surat was ranked the ‘cleanest district’, followed by Indore and New Delhi.

Uttar Pradesh Noida grabbed two awards under the garbage-free city category and also emerged as the country’s “cleanest medium city” in the category of 3-10 lakh population.

“The success of this year’s survey can be gauged through the unprecedented number of citizen feedback received this year — over 5 crore, a marked increase from last year’s 1.87 crore. The 2021 edition was conducted in record time of 28 days despite several on-ground challenges owing to the COVID pandemic,” read an official statement.

How Cities are Ranked for Swachh Survekshan Awards

Now the question arises that “How the Cities are Ranked in Swachh Survekshan 2022“, here we will answer this question.

Part 4: Final Score – Cities are ranked based on marks obtained from Part 1, Part 2 and Part 3

Here is the process to download Swachh Survekshan Toolkit in PDF format:-

STEP 2: At the homepage, scroll over the “SS2021 Toolkit” present in the header and then click at the “SS2021 Survey Toolkit” link.

STEP 3: Afterwards, the Swachh Survekshan 2022 Toolkit PDF will open as shown below:-

As in the previous Swachh Survekshan 2020, MoHUA lay emphasis on ensuring sustainability of the sanitation value chain. The Swachh Survekshan 2021 indicators will focus on parameters pertaining to wastewater treatment and reuse along with faecal sludge. Moreover, there would be a new category of awards namely Prerak Daaur Samman as part of Swachh Survekshan 2021. The Central govt. has launched SS 2021 on 3 July 2020. The important features and its progress till date to specify Swachh Survekshan importance is mentioned here:-

The achievements garnered by SBM(U) in not only building capacity of ULBs butvia various citizen led networks. These will prove to be key tools in preparing for such a public health crisis in the future.

The Prerak Daaur Samman has 5 additional sub categories which are as follows:-
1) Divya (Platinum)
2) Anupam (Gold)
3) Ujjwal (Silver)
4) Udit (Bronze)
5) Aarohi (Aspiring)
In each of the above mentioned category, top 3 cities would be recognized who will be eligible for Prerak Daaur Samman.

The survey will categorise cities on the basis of 6 indicator-wise performance criteria, which are as follows:-
A) Segregation of waste into wet, dry and hazard categories.
B) Processing capacity against wet waste generated.
C) Processing and recycling of wet and dry waste.
D) Construction & demolition (C&D) waste processing.
E) Percentage of waste going to landfills.
F) Sanitation status of cities.

The 2018 SS cleanliness survey, which became the world’s largest cleanliness survey had ranked 4,203 cities. The Swachh Survekshan 2019 which not only covered 4,237 cities but was also the first-of-its-kind completely digital survey completed in a record time of 28 days. The ministry said that Swachh Survekshan 2020 had seen an unprecedented participation of 1.87 crore citizens. 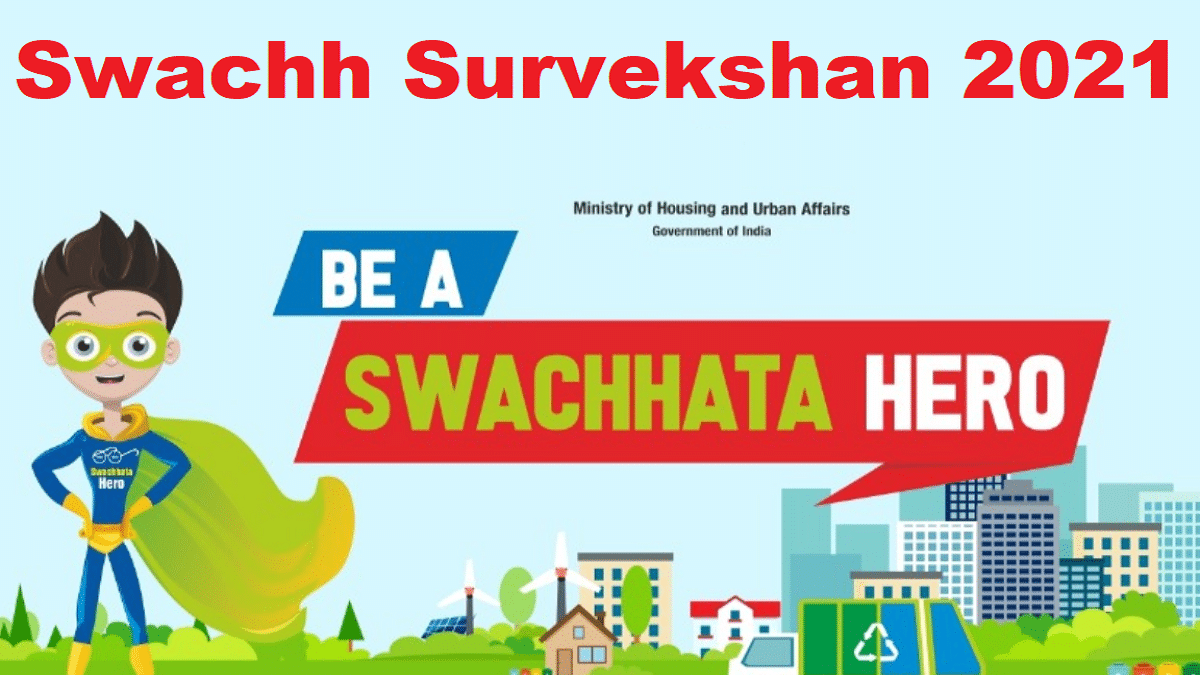