Central government had launched FAME India Scheme Phase 2 for vehicles. The Indian govt. has approved FAME Scheme Phase II with an outlay of  Rs. 10,000 Crore for a period of 3 years which started from 1st April 2019. Out of total budgetary support, about 86 percent of fund has been allocated for Demand Incentive so as to create demand for Electric Vehicles (xEVs) in the country.

Govt. is laying emphasis on increasing incentives to promote e-mobility and to reduce the levels of pollution in the country. Under this Scheme, vehicles are fully electric, operated with chargeable battery and will involve zero emissions. Furthermore, govt. will also develop infrastructure for charging which is necessary for these vehicles.

What is Fame India Scheme Phase 2

FAME India Scheme phase 2 aims to generate demand by way of supporting 7000 Electric Buses (e-bus), 5 lakh Electric Three Wheelers (e-3W), 55000 Electric Four Wheeler Passenger Cars (including Strong Hybrid) (e-4W) and 10 lakh Electric Two Wheelers (e-2W). However, depending upon off-take of different category of xEVs, these numbers may vary as the provision has been made for inter as well as intra segment wise fungibility. In addition, creation of electric vehicle charging infrastructure will also be supported under the Scheme.

Who are Eligible For Subsidy in FAME India Scheme Phase 2

Vehicles, fitted with only advanced chemistry battery, meeting with minimum Techanical Criteria and registered as “Motor Vehicle” as per CMVR shall be eligible for incentive under the scheme. With greater emphasis on providing affordable & environment friendly public transportation options for the masses, scheme will be applicable mainly to vehicles used for public transport or those registered for commercial purposes in e-3W, e-4W and e-bus segments. However, privately owned  registered e-2Ws are also covered under the scheme as a mass segment.

Central govt. earlier launched 1st phase of Faster Adoption and Manufacturing of (Hybrid&) Electric vehicles in India (FAME India) on 1st April 2015. However, this Phase I ends on 31 March 2018 and thus marking the beginning of Phase II. This FAME Scheme was launched under National Mission on Electric Mobility in 2011/ National Electric Mobility Mission Plan 2020, unveiled in 2013. The scheme aims to encourage progressive induction of reliable, affordable and efficient electric and hybrid vehicles (xEV).

It is under the frame work of Demand Incentive Disbursement Mechanism. Incentive amount has been determined for each category of vehicle like Mild Hybrid, Strong Hybrid, Plug-in Hybrid and Pure Electric technologies and battery specification. It is implemented and monitored by National Automotive Board under D/o Heavy Industry. It is one of the DBT schemes categorized under in-kind mode.

Under the digitalization of the schemes for bringing efficiency, transparency with effective monitoring, FAME India Phase 1 portal was launched at http://fame-india.gov.in/index.aspx. FAME India Scheme 2 Portal is functional at https://fame2.heavyindustries.gov.in/. All the process life cycle of the scheme has been digitalized in this online Portal. At present 51 Original Equipment Manufacturer (OEM) , 165 Models of all category of vehicles are registered under this scheme.

Built-in MIS reports are also made available for monitoring and management purpose. Various reports like OEM-wise sanctions, state-wise / manufacturer- wise/ month-wise progress etc are also incorporated for restricted users. As per the DBT compliance, integration of online Demographic Aadhaar Authentication of the beneficiaries is also being enabled.

The subsidy amount under the second phase of this scheme are as follows:-

Central govt. will also make efforts to reduce the total cost of Lithium Ion Batteries used to run the electric vehicles. Moreover, govt. is going to increase the amount of money in phase II of FAME India Scheme.

The System Architecture for FAME India Scheme Phase 2 is shown in the figure here. 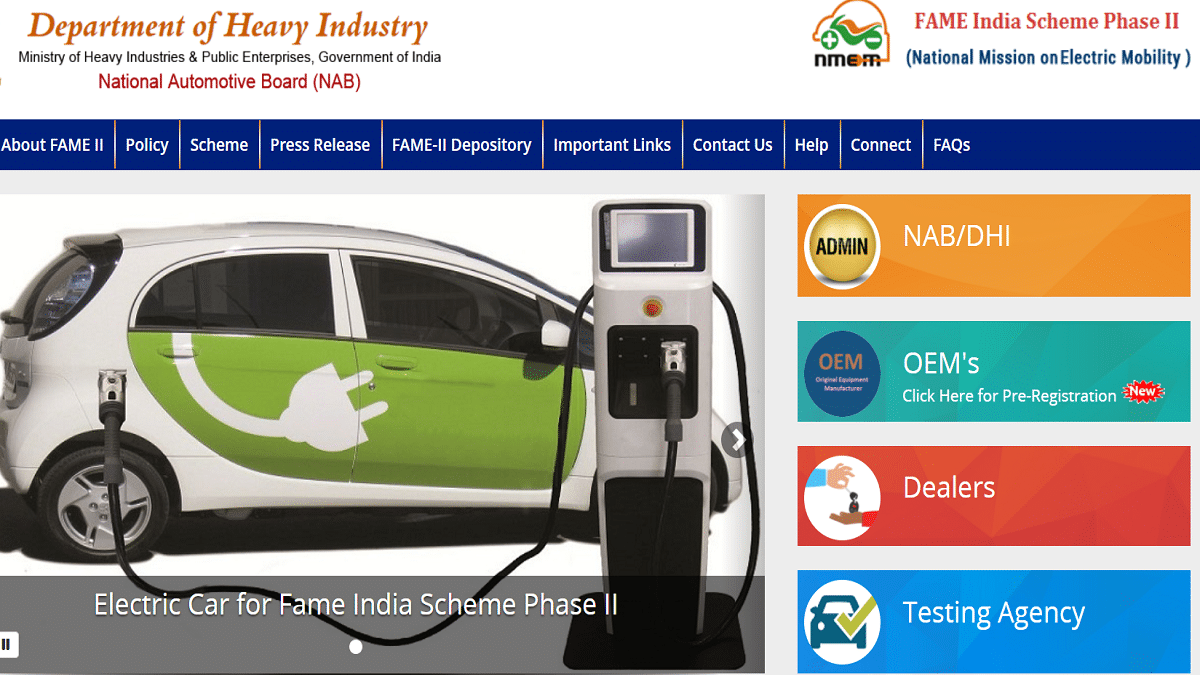