Central government is inviting Nari Shakti Puraskar 2022-2023 online registration form at awards.gov.in. This award is the Highest Civilian Honour for any women given by Ministry of Women and Child Development (WCD). All the women who have worked consistently for the noble cause of Women Empowerment can apply online for this National Award. Each women individual / group / institution can apply online for women national award by making Nari Shakti Puraskar Registration and Login.

President of India will provide this Nari Shakti Puraskar on the occasion of International Women’s Day on 8th March every year. Screening and final selection of the candidates would be done to give awards to winners. Each winner women of any category shall carry a certificate and cash amount of Rs. 2 lakh. This Highest National Award for Women will acknowledge the achievements of women and recognize their contribution to the society.

STEP 2: At the homepage, click at the “Registration” tab present on the top right corner of the page.

STEP 5: After submitting the Nari Shakti Puraskar registration form, a confirmation link will be sent to your registered email id. Authorize and activate by clicking on the link sent on your email.

STEP 6: You can click on the received email or directly click at “Login” tab present on the top right corner of the homepage to proceed to make login for Women National Award.

STEP 9: Fill the Nari Shakti Puraskar Online Application Form 2023 and upload the relevant documents/ pictures against the required fields. Upon entering details in the application form and uploading documents/ pictures, please click “Submit” button. After successful submission, an acknowledgement slip with application no. will be generated and sent to the registered e-mail.

With this portal, for the first time in the history of India, information regarding all national awards would be available to the public on a single digital platform including their eligibility criteria, selection procedure, and details of past awardees. Also, people will be able to make nominations for various awards on a single platform, which is simple and user-friendly.

Why Nari Shakti Puraskar is Given

Number of Awardees and Decoration

There will be total 15 number of Nari Shakti Puraskar Awardees.

International Women’s Day is celebrated every year on 8th March. The Ministry of Women & Child Development celebrates this day to acknowledge the achievements of women for the nation and recognize their contributions to the society. Therefore, it has been decided by the Ministry to confer ‘Nari Shakti Puraskars’ every year to individuals and institutions in recognition of their service towards the cause of women empowerment, especially vulnerable and marginalized women. Read Nari Shakti Puraskar 2023 Guidelines

The Award shall be presented at New Delhi at a special ceremony/ function held on the occasion of the International Women’s Day on 8th March every year.

Who Can Fill Nominations for Nari Shakti Puraskar 2022-23

Nominations for the National Award for Women shall be invited from the following:-

The Nominations would be submitted to the Ministry of Women and Child Development with details as per online application form alongwith supporting documents as mentioned in the application form. The entities mentioned above recommending the nominations should clearly certify the work carried out by the nominees for which the award is being recommended.

The Ministry will also write to all the State Governments, Union Territory Administrations, Central Ministries/ Departments for giving wide publicity for the awards and also for sending nominations through the designated portal. Government may, at its discretion decide the cut-off date for consideration of nominations for awards for that particular year.

The information will be simultaneously placed on Ministry’s website and other social media platforms as well as any other medium of communication as may be decided, along with relevant details.

A Screening Committee shall be constituted by the Ministry of Women and Child Development to scrutinize and short list the nominations received for the Awards considering the achievements of the applying/ recommended individuals and institutions. The screening committee shall consist of:-

Selection of Awardees by the Selection Committee

The Selection Committee may at its discretion also consider individuals other than those who have got nominated/ recommended before the last date of receipt of nominations/ recommendations.

Presentation of the Award

If subsequent to the presentation of awards, it is found that false declaration has been made by the applicant in the application to claim the award or the conduct of an awardee is found to be unbecoming by way of any anti-national, anti-social, unethical, immoral, illegal activities including indulging in crime against women, economic offences etc. or conviction by a court of law, the Ministry reserves the right to withdraw the awards and in such event the name of the awardee shall be deleted from the list of awardees and they would be required to refund the award money to Consolidated Fund of India in such manner, as may be prescribed.

There is no chance for the welfare of the world unless the condition of woman is improved. It is not possible for a bird to fly on only one wing’. -Swami Vivekananda

Following our centuries old values that place women on the highest pedestal in the society, it has been endeavour of the Ministry of Women and Child Development of the Government of India to promote social and economic empowerment of women through cross-cutting policies and programmes, creating awareness about their rights and facilitating institutional and legislative support for enabling them to realize their human rights and develop to their fullest potential. In doing so, the aim also is to inspire and motivate others towards similar achievements contributions.Women have always exhibited strength in varied forms.

Nari Shakti Puraskar (formerly Stree Shakti Puraskar), which literally means ‘Woman Power Awards’, are “National Award in recognition of exceptional work for women empowerment” conferred by the Hon’ble President of India every year on 8th March, the International Women’s Day as a mark of respect and recognition for those who have demonstrated exemplary courage and stellar contribution towards empowerment of women.

For more details, visit the official website at https://awards.gov.in/ 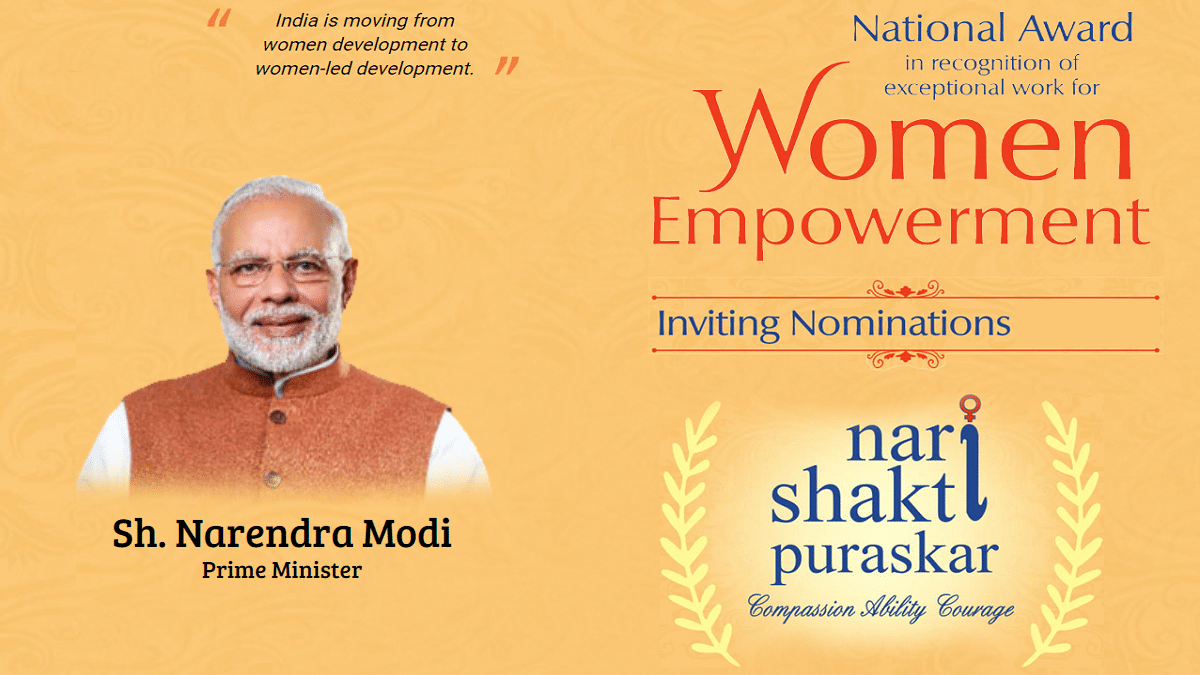