Chief Minister of Andhra Pradesh has started Amma Vodi scheme 2023 and through the implementation of the scheme, many incentives were been given to the students of the government schools in Andhra Pradesh. In this article, we will share with you all the other details related to the Amma Vodi scheme such as the final beneficiary list which has been declared by the concerned authorities. In this article, we have provided a step-by-step guide through which you can check your name in the Amma Vodi Scheme list of beneficiaries.

In Andhra Pradesh Budget 2022-23, the state govt. has allocated Rs. 6595 crore for the implementation of Amma Vodi Scheme for the current financial year. Amma Vodi beneficiary list has been released online and all the beneficiary students can check their name in final list of beneficiaries. Total Rs. 6,595 crore amount credited into the bank accounts of 43,96,402 mothers of the students across the state and benefitted 80 lakh school and college-going children. Addressing at the public meeting CM YS Jagan Mohan Reddy elaborated that state government will distribute Rs. 12,000/- worth tabs to students entered into class VIII from this academic year and from this year September onwards.

CM YS Jagan Mohan Reddy had announced AP Jagananna Amma Vodi Scheme as part of “Navaratnalu”. To avail scheme benefits, the student must belong to below poverty line (BPL) household irrespective of caste, creed, religion and region. The main focus is to educate children from class 1st to 12th (intermediate education) in any recognized govt. / govt. aided / private aided and private unaided schools. Even the Jr. Colleges students including residential schools / colleges in the state are eligible.

The third phase under Amma Vodi Scheme has been launched soon by CM YSR Jagan Mohan Reddy. Around 43.96 lakh women got Rs. 15000 directly into their bank accounts for sending their children to school. The state government is going to spend Rs. 6595 crore on implementing this scheme. The state government has exempted the 75% attendance criteria to increase the total number of beneficiaries of Amma Vodi Scheme.

The AP Amma Vodi Scheme highlights at glance are shown in the table below:-

The Amma Vodi scheme has launched in order to reduce the dropout ratio in schools. Under this scheme, Rs. 15000 per annum is deposited into the bank account of mothers who send their children to school. Through this scheme, poverty won’t come in the way of education. Every woman of the state will get the opportunity to educate their children. The second phase of Amma Vodi scheme has been launched and under this scheme, Rs. 15000 has been credited into the bank account of the mothers who send their children to school.

The Chief Minister of Andhra Pradesh state announced a flagship program known as the popular AMMA VODI scheme. It is originally a part of the NAVARATNALU initiative which is designed to provide financial assistance to each mother belonging to below the poverty line household, irrespective of caste, creed, religion, and region. This incentive will enable her to educate her child/children from Class I to XII in all the following institutions-

A separate Amma Vodi portal has been started which can be accessed through the link – https://jaganannaammavodi.ap.gov.in/AMMAVODI/

STEP 2: At the homepage, click at the “CLICK HERE FOR SEARCH CHILD DETAILS FOR AMMAVODI SCHEME” link

STEP 3: The name find page of students for availing benefits of AP Jagananna Amma Vodi Scheme will appear as shown below:-

STEP 5: Here mother / guardian aadhar number needs to be entered along with the verification code. Finally, click at the “Get Details” button to get your children information.

White Ration Card is the only criteria to get financial assistance under AP Jagananna Amma Vodi Scheme. All the students studying in government, social welfare residential and private colleges would be covered. All those students whose name is not present in the AP Jagananna AmmaVodi Scheme list of beneficiaries need not worry. They shall apply online for their name inclusion in AP Amma Vodi Scheme next phase list of beneficiaries.

The final list of eligible beneficiaries will be made available each year at schools and village/ward secretariats across the state.

In an interview premiered on 2nd April 2019 with Vanitha TV, YS Jagan’s mother YS Vijayamma said that the decision to implement Amma Vodi was first taken in 2011. In 2014, the manifesto promised financial assistance of Rs. 500 per school-going child, directly deposited in the mother’s bank account.

During the Odarpu Yatra and subsequently the Praja Sankalpa Yatra, YS Jagan observed that many families were not sending their children to schools because of poverty. Mothers and guardians expressed their concerns to him about facing problems in providing basic amenities for their children. YS Jagan promised to help them out by providing financial incentives through Amma Vodi.

The Jagananna Amma Vodi scheme provides Rs. 15000 as financial assistance to mothers or recognized guardians, from below poverty line households. The assistance would be given to mothers irrespective of caste, creed, religion, and region in order to assist them to provide for their child/children’s education. The YSR Amma Vodi Scheme aims at reducing dropout rates in schools and eradicating child labor in the state by providing incentives to mothers and legal guardians. In order to avail of its benefits, the parents must also ensure that the child is regular and punctual.

AP Amma Vodi Yojana is a major step to encourage parents to send their children to schools. As more and more students would go to school, the higher would be literacy rate. This would result in the higher education rate of children and would enable them to lead a life of dignity and honour. The decision to implement AP Amma Vodi Scheme was taken in the 1st cabinet meeting of Andhra Pradesh govt. headed by CM Jagan

In the Jagananna Amma Vodi Scheme, the state govt. of Andhra Pradesh will provide yearly financial assistance of Rs. 15,000. This amount would be directly transferred into the bank accounts of mothers or legal guardians. While transferring second installment, Chief Minister YS Jagan announced that instead of the yearly financial assistance, students from class 9th to 12th can opt for a laptop.

All the candidates must fulfill the eligibility criteria to become eligible for AP Jagananna Amma Vodi Scheme:-

If Amma Vodi Scheme Beneficiary Mother don’t have a white ration card or aadhar card, the village or ward volunteer will certify you as eligible. After a six-stage filtration process, the details of Amma Vodi Scheme beneficiaries will be forwarded to the Mandal education officer. Those mothers whose children are studying from Class 1st to 12th, but are not covered in the previous year’s list of beneficiaries, shall be identified for extending the benefit based on the following criteria:-

There are many benefits of the AP Amma Vodi scheme, first and the foremost benefit of the scheme is the stipend that will provide to the school-going children. The incentive will help the poor families to attend school and help them to cover some of their expenses. It will prove to be a great way to encourage families to send their children to school. As we all know that the percentage of school-going children is very less in rural areas, this initiative will help increase the percentage to a great extent.

Impact of Amma Vodi Scheme on Enrollment in AP Schools

With the announcement of Amma Vodi Scheme, there was a 40% spike in admissions. As per the statistics available with the School Education department, enrollment of students in government schools in the 2018-19 academic year was 37,20,988, and in the 2019-20 academic year, it increased to 38,18,927. For 2020-21, over 42.46 lakh students have enrolled in government/government-aided schools.

The school education department has fixed a timeline for the collection of details, confirmation, rectification of errors if found, and preparation of the list of eligible Amma Vodi beneficiaries. The students are selected after undergoing a rigorous six-stage filtration process and the list of mothers/guardians is released digitally.

Any discrepancies in details are sorted out by the school principals. Complaints regarding the eligibility of a beneficiary are sent to the Joint Collector for appropriate redressal. The final list, after corrections, is displayed on the portal – https://jaganannaammavodi.ap.gov.in/ and in all the village/ward secretariats. User IDs and passwords are given to the principals of government and private schools to upload details of students on the online portal, with a deadline to submit.

Here are the features of AP Jagananna Amma Vodi Scheme:-

Question 2 – How can I check my name in the Amma Vodi Scheme list & What is website name?
Answer 2 – You can check it on the official website of Amma Vodi Scheme at jaganannaammavodi.ap.gov.in/AMMAVODI. For your assistance we will also provide the beneficiary list pdfs/ links on this page.

Question 3 – When will I receive the benefit of AP Amma Vodi Scheme?
Answer 3 – The implementation of the scheme is scheduled to take place soon. After the official launch by CM YS Jagan, beneficiaries will start getting the amount of benefit in their bank accounts.

For more details, visit the official website at http://jaganannaammavodi.ap.gov.in/ 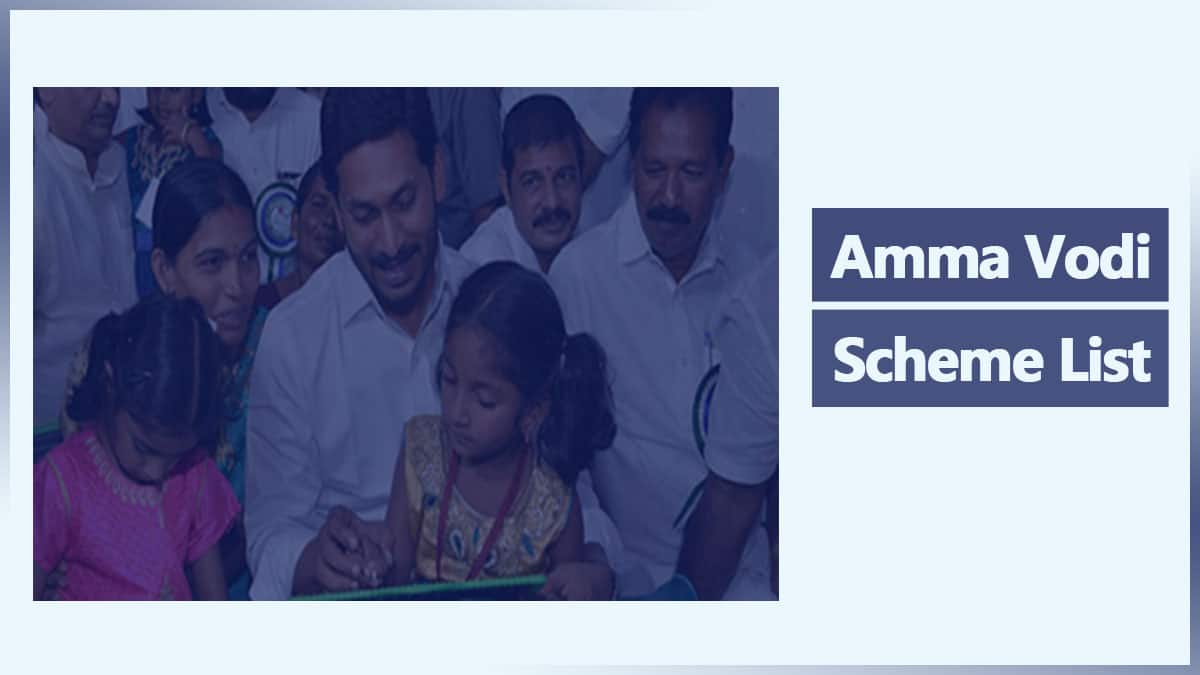