CM KCR has decided to start the third phase of the programme from the current financial year. Telangana govt. has allocated funds for the Sheep Distribution Program Phase 3 in the TS state budget 2022-23. The distribution of sheeps to shepherds and sheep producer societies in Phase 3 is going to begin soon.

The sheep distribution scheme for Golla Kurumas and Yadavs and fish distribution programme for Mudiraj community have yielded good results so far. The state has surpassed Rajasthan and became number one in sheep population in the country. KCR mentioned that agriculture in Telangana region when AP was unified was in a bad shape. Former governments had also neglected and destroyed hereditary professions, hereditary occupant’s life was always intertwined with BC communities who have excellent trade skills.

Telangana state has now emerged on top in the dairy sector in the country. For dairy farmers, the government was providing subsidies and extending support in several ways. The state-run Vijaya Dairy and Karimnagar Dairy were working efficiently. After agriculture, handloom sector was the largest among hereditary professions. Padmashali community, which was given respect on a par with Brahmins in the past, became a victim of starvation and suicide deaths under united AP rulers.

Sheep Distribution Scheme Phase 1 was started by the Telangana government from 16 January 2021. 1st phase implementation of sheep distribution programme was put on hold in the year 2020 due to Coronavirus (COVID-19) pandemic in the state. CM K Chandrashekhar Rao had instructed the officials to complete first phase of Telangana Sheep Distribution Scheme 2022. So distribution of sheeps to shepherds and sheep producers societies was started at Nalgonda in 1st Phase which is now completed.

In the sheep distribution programme, Telangana govt. will provide 75% subsidy to beneficiaries among the Golla-Kuruma community. Telangana Sheep Distribution Scheme has empowered the community both socially and economically.

It is launched to support the traditional shepherd community, the Kurumas and Yadavas in Telangana. Every person aged above 18 years from shepherd community eligible for the scheme and is given a unit of sheet, which has 20 sheep and a ram.

The government started mobile veterinary units to attend to sickness and treatment of animals for the scheme. The toll free number is 1962.

For providing fodder the government is giving 75% subsidy on grass seeds.

History of Sheep Distribution in Telangana

The scheme was launched on 20 June 2017 by the Chief Minister of Telangana, K. Chandrashekhar Rao. Of the Rs. 1.25 lakhs cost per unit, the government provides 75% (Rs. 93,750) of the cost and 25% (Rs. 31,250) is borne by the beneficiary. The scheme was started to strengthen the rural economy through empowerment of Golla and Kurma communities in their traditional occupations. It is implemented by Telangana State Sheep and Goat Development Cooperative Federation (TSSGDCF). The sheep are purchased from other states, in order to avoid recycling and increase the net population in the state. The sheep breeds chosen are Nellore Brown (Dora), Nellore Jodipi (white with black spots on face), Deccani and Madras Red. 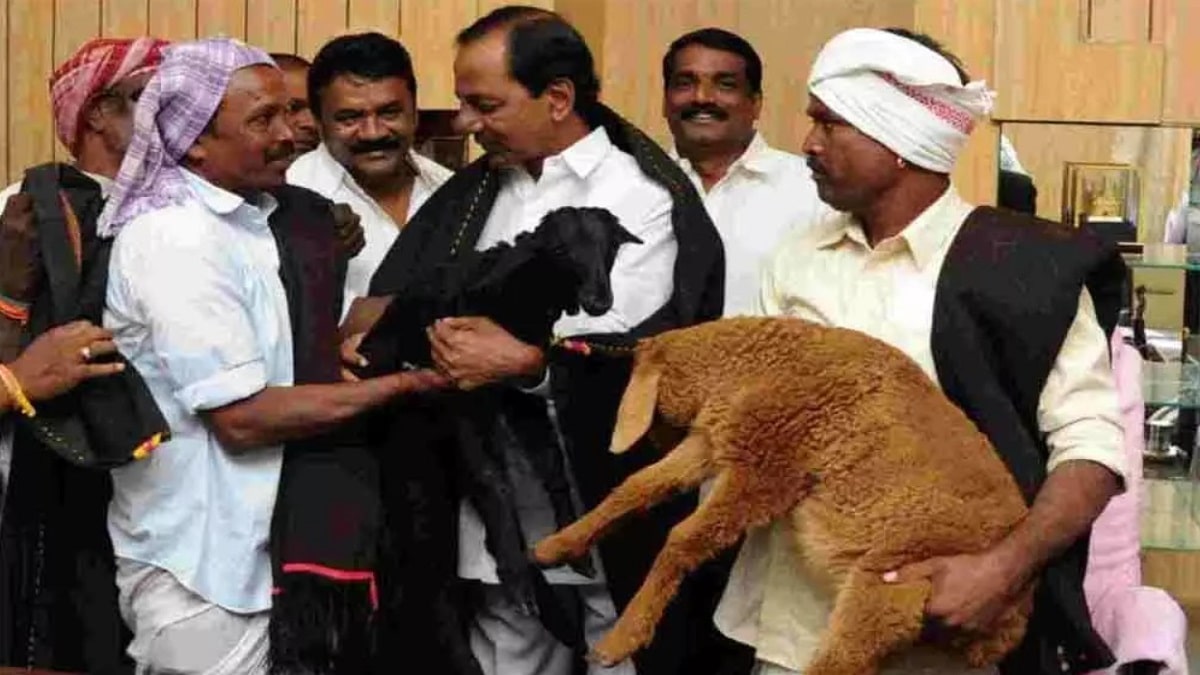