Jharkhand Sahay Yojana 2023 has been launched by the state government to promote sportspersons in extremist-hit areas (Naxal affected areas). Under the Sports Action Towards Harnessing Aspirations of Youth (Sahay) scheme Phase 1, around 72,000 youths between 14 to 19 years belonging to maoists affected regions will get an opportunity to show their skills in the field of sports. The state govt. has already asked officials from Sports Department to identify potential talents under 19 years of age. In this article, we will tell you about the complete details of the Jharkhand Sahay Yojna.

What is Jharkhand Sahay Scheme 2023

Chief Minister Hemant Soren launched Jharkhand Sahay Yojana on 15 December 2021 from the West Singhbhum district. In Sahay Scheme, talented youths from rebel hit areas like Chaibasa, Seraikela-Kharsawan, Khunti, Gumla and Simdega can show their skills in various sports upto panchayat, ward, block and district level. Youths will get an opportunity to show their skills in other sports including hockey, football, volleyball, athletics. The Sahay Yojna will be operated by the Sports Department.

In order to instill a culture of sports and identify talent in the state, CM Hemant Soren had earlier given directions to sports department officials to work on a special sports scheme named Sahay for youth from Naxalite-affected areas. Officials were asked to work extensively to connect youth below the age of 19 with the Jharkhand Sahay Scheme. Under Sahay Yojana, potential sports talent will be identified from the panchayat level and taken to the block level and district level where they will be prepared for national and international sports events.

The primary objective of Jharkhand Sahay Yojana is to motivate the youth of LWE affected areas towards a positive life by giving them an identity through sports. In the competitions organized under Sahay scheme, winners and runners-up at district and state level will also be honoured by giving incentives.

Speaking on the launch event of Jharkhand Sahay Yojana, CM said “Since years some areas of Jharkhand have been affected by Naxalism, but attempts were made to make it frightening by other people, who do not know about the tribal, indigenous, language, culture and tradition here as a result they are not recovering from the picture that they have created.” CM said “the present government is trying to change this picture and is trying create an atmosphere of smile in the remote forests of Jharkhand.”

Chief Minister Hemant Soren also mentioned “efforts will be made to create a positive environment in the fields, barns, towns, so that no one can divert the youth.” He further added that sports nurseries would be established in the Naxal-affected areas and work will be done to differentiate these areas. Jharkhand state govt. has made sports a medium, so that state’s identity can be established apart from minerals. Now instead of the sound of bullets, it will resonate with the laughter of the players and tourists.

Jharkhand Sahay Scheme will be implemented in coordination with the sports and police departments. The main objective of Sahay Yojana is to reduce the gap between the people and the police through sports while grooming budding sportspersons. Under the Sahay scheme, the government plans to organise multiple sports tournaments in collaboration with national and state-level sports federations.

Chief Minister Hemant Soren said that the people in Naxal affected areas were not shown the right way despite the fact that there is no dearth of talent among the people here but it was not assessed. Players of Jharkhand are making a name in the field of sports and now a new Sahay Yojana has been started. Sports Action Towards Harnessing Aspirations of Youth Scheme is launched with the objective of promoting sports. CM further added that sports events will be organized at every level. Mr. Soren said that personally he is keeping an eye on the plan urged the players to come forward and advantage of the Jharkhand Sahay Scheme.

The draft for the new sports policy of the state is almost ready. The policy lays emphasis on developing sports culture across the state. The government plans to develop free day boarding centres in each block along with equipping every district with modern state of the art residential training centres. To promote hockey, stadiums are being constructed in four districts including Khunti, Simdega & Gumla. Football fields are also being developed.

Additionally, under Poto Ho Khel Vikas Yojana (sports development programme named after martyr Poto Ho), work is being done to build a sports ground in every panchayat. Under the scholarship scheme, players will get a scholarship of Rs. 3000 to Rs. 6000 every month. CM mentioned that the performance of Hockey players Salima Tete and Nikki Pradhan and archer Deepika Kumari in the Tokyo Olympics have made the entire state proud. 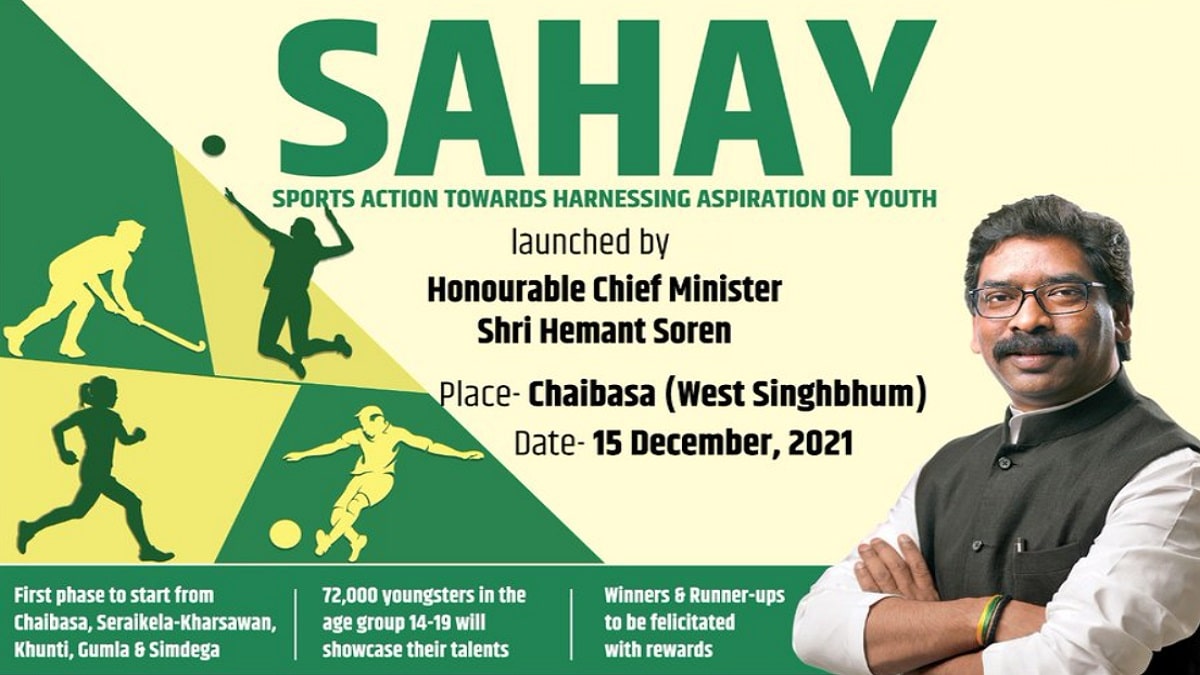