Tamil Nadu government has launched TN Meendum Manjappai Scheme 2023 to discourage use of plastic bags. Chief Minister M.K. Stalin on 23 December 2021 started Tamilnadu Meendum Manjappai Yojana to promote usage of cloth bags by general public. Through this scheme, Chief Minister MK Stalin wants to discourage the use of plastic bags which have become rampant in the state over the years. Contending that usage of single-use-plastic is harmful to environment, Mr. M.K Stalin called upon the citizens to completely reduce usage of plastic products.

Some days after launch of Meendum Manjappai Scheme, several programmes and events in the state have also turned to using cloth bags instead of plastic bags. Many major shops of the state have given orders to the units making cloth bags, especially yellow bags. The cloth bag-making units of Pudukottai, Kancheepuram, Salem, Erode, and Dindigul have become vibrant with orders pouring in from wholesale and retail traders across the state.

Rajeswari, a women entrepreneur from Coimbatore, who has been in the business of cloth bags for the past one decade while speaking to us said: “Business was not doing good since the start but the announcement of the Chief Minister has made things change and I have got several orders for weddings and from wholesale and retail market of Coimbatore. I don’t know how I am going to meet up the demand and for that, I might add one or two extra units for the production. This is good news for environment as well as putting an end to the use and throw culture which had never the social support of Tamil people.”

Many major cloth shops and textile majors are also shifting their priorities to cloth and jute bags instead of plastic bags. Nallathambi Velayudhan, who is running a jute bag-making unit in Erode while speaking to us said: “The Chief Minister’s announcement is accepted well by the society and the orders we are getting from unexpected quarters is a clear indicator to that. Jute and cloth bags are turning the tide in Tamil Nadu and we feel that this is important for the conservation of environment as well as for promotion of cloth and jute bags.”

Tamilnadu government is also roping in the service of several NGOs to create awareness of using cloth and jute bags instead of plastic throw-away bags. NGOs will also make people aware about the necessity to preserve the environment as studies have revealed that plastic bags take centuries to decay and how dangerous it was for the environment.

S Santosh, who is heading the Environment department of Centre for Policy and Development Studies, a think tank and a research centre based out of Chennai while speaking to us said: “We have already conducted three rounds of meeting with the state environment department and will soon undertake a campaign across the state against the use of plastic carry bags and how dangerous it was for our environment.”

Discouraging Use of Plastic Bags in TN Meendum Manjappai Scheme

While launching the Tamilnadu Meendum Manjappai Yojana, CM reiterated that “If plastics are thrown away, it would take several years for it to decompose. It adversely affects the soil quality, air quality and water bodies. Tamil Nadu govt. will encourage the usage of cloth bags instead of plastic bags as a part of its Go Green initiative. Those people who does not use cloth bags and still use plastic bags would face consequences. So far, electricity connection to 130 factories have been withdrawn for violating the ban against single-use plastics.

Soil Pollution due to Single Use Plastic Usage in Tamilnadu

Soil Pollution is caused when people throw plastic bags in open fields or agricultural lands. If the soil is affected, agriculture would be affected which directly affects life of people. Moreover, cattle eat plastics and die. Through TN Meendum Manjappai Scheme, govt. will promote use of cloth bags instead of plastic bags which are easy to decompose and will prevent soil pollution.

CM MK Stalin pointed out that if plastic carry bags are thrown into waterbodies, then the organisms present there are affected and the water is polluted too. He added that the sea is affected when single-use plastic products are thrown into it and aquatic species feed on them and die. Through Tamil Nadu Meendum Manjappai Scheme, govt. will promote use of cloth bags instead of plastic bags which will prevent water pollution and thus save life of aquatic animals.

Toxic chemicals emanate from burning single-use plastic products and they affect the air quality, Mr. Stalin said. So, considering the extent of its damage to the environment, CM appealed to citizens to stop the use of plastics.

Thus it can be inferred that in order to prevent soil pollution, air pollution, water pollution and to save aqua species, discouraging use of plastic bags is necessary. CM said that the government alone could not implement this, but the general public should join hands. If people reject plastic products, there can be a definite change. 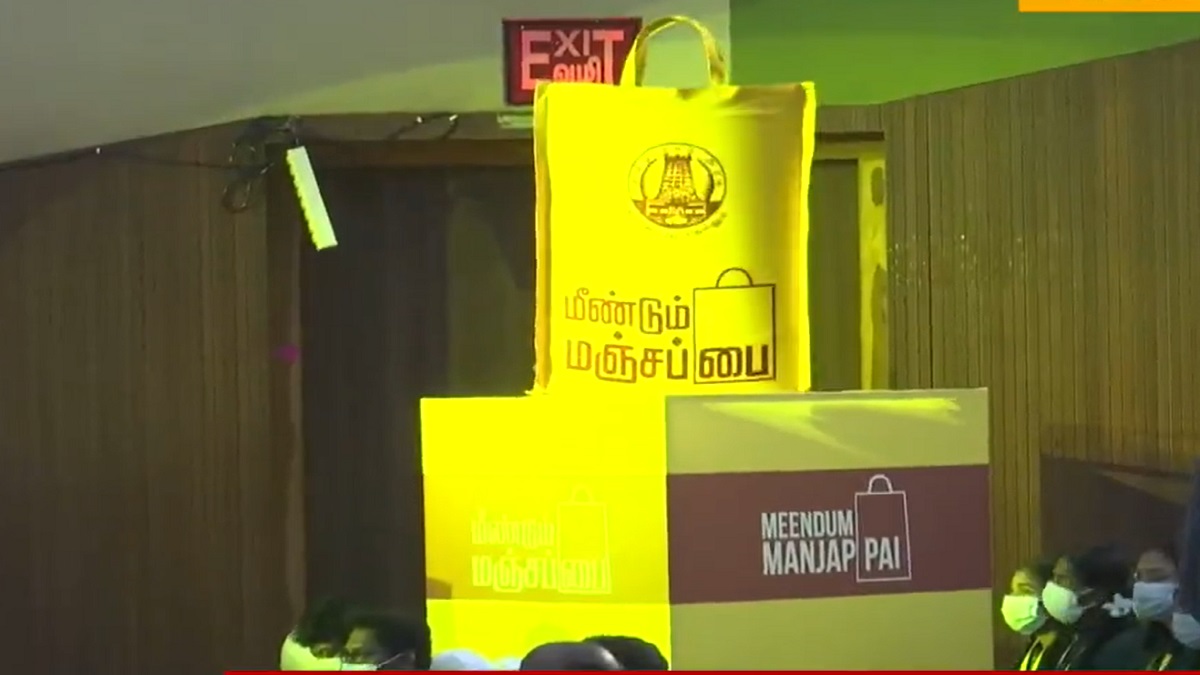