In AP YSR Rythu Bharosa Scheme 2022, the state govt. will provide Rs. 13500 p.a to beneficiaries. The budget allocated by the state government under this scheme is Rs. 5500 crore. Apart from all these, the scheme also assures free borewells and zero-interest loans to the eligible farmers. Under this scheme, the amount will directly be transferred to the bank accounts of the beneficiaries. The complete eligibility criteria and the new AP YSR Rythu Bharosa Scheme List of beneficiaries had been released.

Also known as the PM Kisan scheme, the Rythu Bharosa intends to extend financial assistance of Rs 13,500 per year to eligible farmers in three installments. So far, the Andra Pradesh government has disbursed Rs 18,777 crore in two and half years to the state’s farmers through this scheme. This includes the latest tranche of Rs 2,052 crore released to 50.37 lakh farmers.

The YSR Rythu Bharosa scheme was launched at the 70th birth anniversary of YS Rajasekhar Reddy where a cheque of Rs. 7.50 lakh was handed over to the widow of a farmer who ended his life in 2015 due to unpaid loans. The scheme was a part of the election manifesto of YSRCP and as promised, the scheme was successfully launched in June 2019. However, the implementation was done on 15th October 2019. The state govt. will ensure that each farmer gets minimum support price of their crops.

STEP 2: At the homepage, candidates can click at the “Login” button to open page as shown below:-

STEP 5: After successful registration, people would be able to get Rs. 13,500 assistance after their name appears in the AP YSR Rythu Bharosa List.

People must download the AP YSR Rythu Bharosa Scheme Application Form in PDF format through online mode and keep it safe for any future reference.

All the applicants can now check their Rythu Bharosa payment status by following the simple steps given below:-

STEP 2: At the homepage, click at the “Know Your RythuBharosa Status” link present in the header as shown below or directly click https://ysrrythubharosa.ap.gov.in/RBApp/RB/Phase2Paymentstatus

STEP 3: Then the AP YSR Rythu Bharosa Scheme Payment Status page will appear as shown below:-

STEP 4: Accordingly, all the candidates can enter the Aadhar Number and click at the “Submit” button to check the AP YSR Rythu Bharosa Scheme payment status for 2nd Phase.

Here candidates can enter the Aadhar number or mobile number and finally click at the “Submit” button to know your input subsidy status.

To avail assistance of Rs. 13,500 per year, farmer will have to follow the conditions mentioned in the YSR Rythu Bharosa Scheme Guidelines. Under this scheme, there is no restriction on land holdings by land-owner families. However, the minimum area requirement which is to be taken on lease by a single individual landless tenant farmer is different:-

People must also check the list of exclusion categories so as to avail benefits of YSR Rythu Bharosa Scheme.

Here are the complete details of exclusion categories for AP YSR Rythu Bharosa Scheme. Any person in the following categories of higher economic status shall not be eligible for scheme benefits:-

Any person finding any difficulty regarding YSR Rythu Bharosa Scheme in AP can dial toll free nubers 1100 or 1902 to raise grievance. Previous scheme of the TDP govt. namely Annadata Sukhibhava has been scrapped in which govt. announced to provide Rs. 15,000 per annum to farmers. The scheme had been implemented since 15 October 2019 & people can then fill AP YSR Rythu Bandhu Scheme Apply Online Form.

The important features and highlights of YSR Rythu Bharosa Scheme are as follows:-

The 1st phase of AP YSR Rythu Bharosa Scheme was implemented on a mandal wise and village wise manner to provide economic support to farmers. The YSR Congress Party Government has decided to include tenant farmers in Rythu Bharosa scheme as they are excluded from the Pradhan Mantri Kisan Samman Nidhi (PM-Kisan) scheme.

The Real Time Governance Society (RTGS) has prepared the AP YSR Rythu Bharosa Scheme list of beneficiaries. There are around 66,54,891 farmers which are expected to be the beneficiaries of this investment support scheme in Andhra Pradesh. Around 15.36 lakh tenant farmers will also get benefited from farm investment support scheme. A total of 81.90 lakh farmers in Andhra Pradesh, both landowners and tenants, are eligible for the YSR Rythu Bharosa scheme.

The YSRCP government had initially planned to give the farm investment support under YSR Rythu Bharosa separately, but later merged it with the PM-kisan scheme for the landowners. The installments of YSR Rythu Bharosa would be credited directly into the bank accounts of the farmer through direct benefit transfer (DBT) mode.

AP govt. has disbursed second tranche of YSR Rythu Bharosa-PM Kisan Scheme. Chief Minister YS Jagan Mohan Reddy has released the amount to the bank accounts of the beneficiaries on 26 October 2021. Under Rythu Bharosa (second installment), 50.37 lakh farmers have been given benefits (Rs. 2,502 each). Under the scheme including the amount credited on 26 Oct 2021, the farmers were provided Rs. 18,777 crore in the last two and a half years. 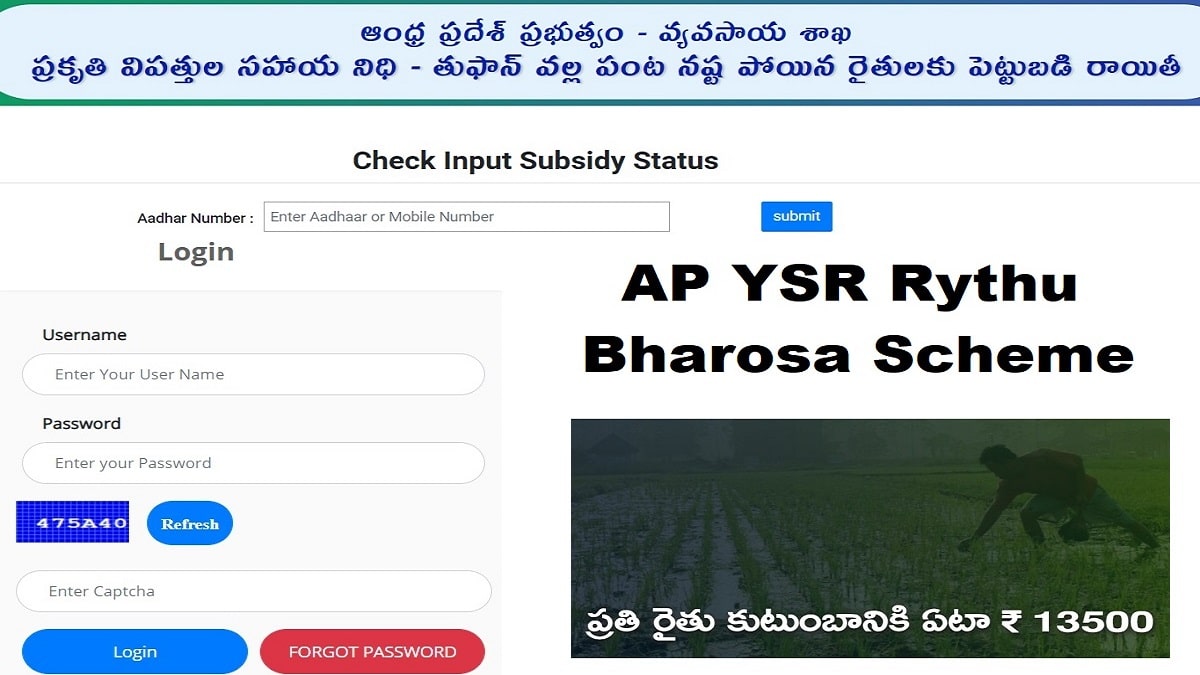