Andhra Pradesh government had launched AP YSR Bheema Scheme 2023 on 21 October 2020. In this scheme, the state govt. will provide insurance coverage for primary bread earners of Below Poverty Line (BPL) families. The currently ruling YSRCP government has fulfilled another poll promise with the launch of its flagship YSR Bhima Scheme.

The AP YSR Bheema Scheme covers 1.41 crore “Primary Bread Earners” of BPL families belonging to the unorganised sector. The AP state government will single-handedly funding the entire insurance scheme. The estimated value of premium which would be borne by the state government will be Rs. 510 crores.

Now the state govt. headed by CM YS Jagan Mohan Reddy has taken a crucial decision to apply YSR Bheema scheme support to the families of those who died despite not being enrolled by it. AP government will pay a premium to ensure that even these families who are unable to apply for insurance as per the regulations are included. This decision will provide security to a total of 12,039 families. CM Jagan launched the YSR Bheema scheme on 21 October 2020 with new procedures in the state.

The Andhra Pradesh government has assured that the claim amount will be deposited into the linked bank account within 15 days of the claim being made.

Lack of financial security of the BPL families in case of the bread earners, working in the unorganised sector, losing his/her life is a nightmare for these families. The financial turmoil that the family is subjected to, in case of such an eventuality, cannot be fathomed. During his Praja Sankalpa Yatra, Jagan came across scores of citizens, facing a number of issues due to lack of insurance coverage, CM promised to launch AP YSR Bheema Scheme for them.

When it comes to the selection process of YSR Bheema Scheme beneficiaries, volunteers would survey door to door and check for the white ration card holders. This would further be supervised by the Secretary of Welfare within the Secretariat. The selected beneficiaries should open a bank account including the nominee. The beneficiaries have to pay a premium of Rs. 15 per annum.

Nominees include wife, 21-year-old son, unmarried daughter, widowed daughter and dependent parents, widowed daughter-in-law or her children should be nominated. The beneficiary is given an Identity Card with Unique Identification Number (Unique Id), policy number. The insurance must be paid within 15 days of the claim being intimate.

The district federations under the SERP process the claim and the amount is deposited directly in their bank account. The beneficiaries are advised to contact PD DRDA for complaints regarding Insurance Enrollment or Claim Payment.

Earlier, the AP state govt. was providing free insurance to the poor at its own expense due to the suspension of financial assistance from the centre for the existing insurance scheme. Through this, the government is providing financial assistance to those who die naturally or accidentally. Around 11,022 people who had been eligible for the scheme since the scheme’s inception and were not covered by the regulations had died so far with normal conditions. Moreover, another 1,017 had died from accidental or permanent disability. In fact, the state government has paid the premium due to the respective banks on behalf of each of the names registered in the YSR insurance scheme.

However, a total of 12,039 families who were eligible for the bank died before the registration process was completed. Officials said they were on a list of those who could not get financial assistance from the relevant insurers and banks. They said that CM YS Jagan had decided to treat them generously and support their families. The CM directed them to seek financial assistance exclusively from government funds.

The state government will spend Rs. 258 crore on these 12,039 families, according to the Rural Poverty Alleviation Program (SERP). Authorities handed over financial assistance to YSR Bheema scheme beneficiaries on 6 April 2021 on the auspices of CM YS Jagan Mohan Reddy. Around 12,039 families received financial assistance of Rs. 258 crore on the day, SERP officials said. 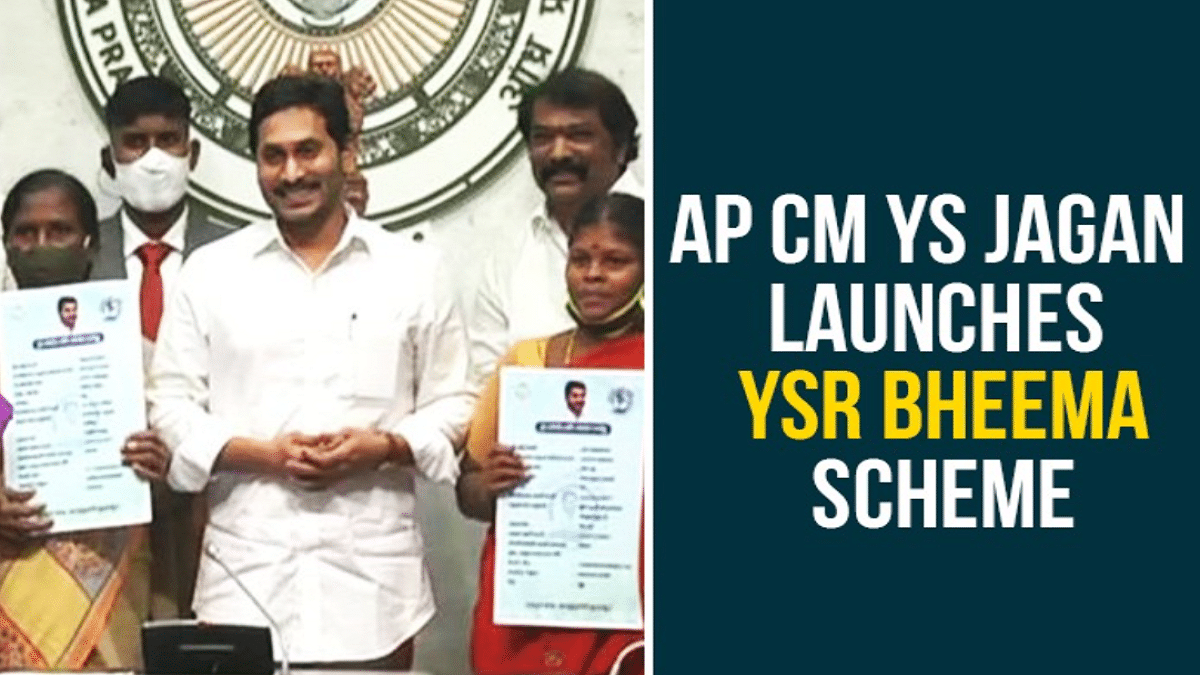