Samajwadi Smartphone Yojana Phones Might be Manufactured by Samsung 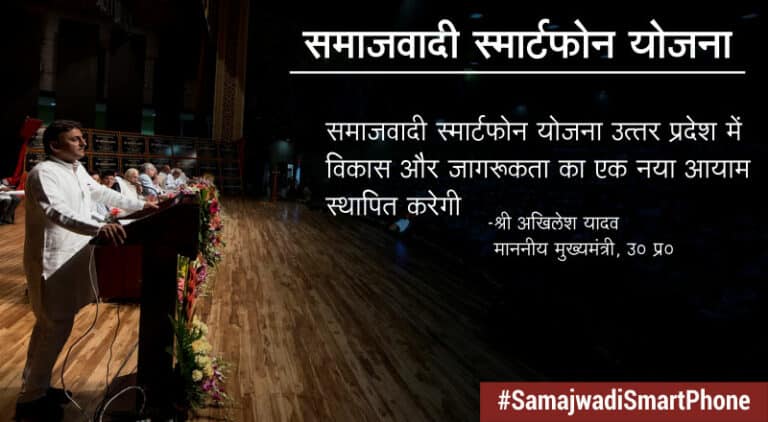 Samajwadi Smartphone Yojana, a free smartphone scheme launched by the Samajwadi Government in Uttar Pradesh is attracting a lot of candidates for online applications. The SP government, if came back to power in 2017 elections will distribute free smartphones to the eligible candidates.

The smartphone under the scheme may be manufactured by Samsung as it has recently signed an MoU with the UP government to expand its manufacturing unit in Uttar Pradesh. The company would be investing about Rs. 1970 Crore in the state to set-up the facility.

Announced by the Chief Minister Akhilesh Yadav, the free Samajwadi Smartphones will be loaded with several government applications. The apps will help users to know about the government initiatives in several fields and share their feedback.

samajwadisp.in is the official website where the online applications for the scheme are being invited.

There are 18 comments on this article | leave a replyTags: Samajwadi Smartphone Yojana

Rajesh Kumar at सरकारी योजना
Related Content
« Urja Ganga – The Mega Gas Pipeline Project in Varanasi
Samajwadi Smartphone Yojana – Only 8 Days Left to Apply »
Disclaimer and Notice: This is not the official website for any government scheme nor associated with any Govt. body. Please do not treat this as official website and do not leave your contact / personal such as Aadhar Number or Mobile No. information in the comment below. It is not possible for us to reply to each comment/query, neither we can address the complaints regarding any scheme. We request all our visitors to visit the official website of the concerned department / authority for any complaint, query about the scheme / information published on this website.