Pradhan Mantri Awas Yojana home loan scheme 2017 for middle income group (MIG) has been announced by the central government. The government has now included middle income group under the credit linked subsidy component of the scheme to provide interest subsidy on the housing loans. Under the scheme, the monthly installment for the housing loans taken in 2017 will come down by Rs. 2000. The government has introduced two MIG categories, MIG-1 and MIG-2 under the new loan scheme.

Persons who have taken/applied for housing loan on or after January 1st 2017 would be eligible to take benefits of up to Rs. 2.35 Lakh under the scheme. Under the new PMAY home loan scheme for MIG, urban families with household income of up to Rs. 18 lakh per annum would be able to take benefits of the scheme. The government has signed MoU with 70 lending institutions for providing home loans to beneficiaries under CLSS for MIG.

The central government has recently extended the last date for availing subsidy on home loan under the CLSS component for MIG. The deadline has been extended by 15 month, i.e. interested MIG applicants can now avail PMAY home loan subsidy till March 2019.

The total interest subsidy accruing on these loan amounts will be paid to the loan account of beneficiaries up front in one go there by reducing the burden of Equated Monthly Installment (EMI). Additional loans beyond the aforementioned specified limit, if any, will be at non-subsidized rate. There would be no processing fee charged by the PLI’s for applications under the CLSS. The scheme initially would be implemented for one year with effect from 01-01-2017.

Apart from the family as comprising of wife, husband and unmarried daughters and sons, single unmarried youth and earning young adults can also apply for the subsidy under the CLSS for MIG loan scheme. Women with overriding preference to widows, single working women, persons belonging to SC/ST, BC, Differently abled and Transgender people would be given preferences for loans under the scheme.

To be eligible to interest subsidy under CLSS for MIG 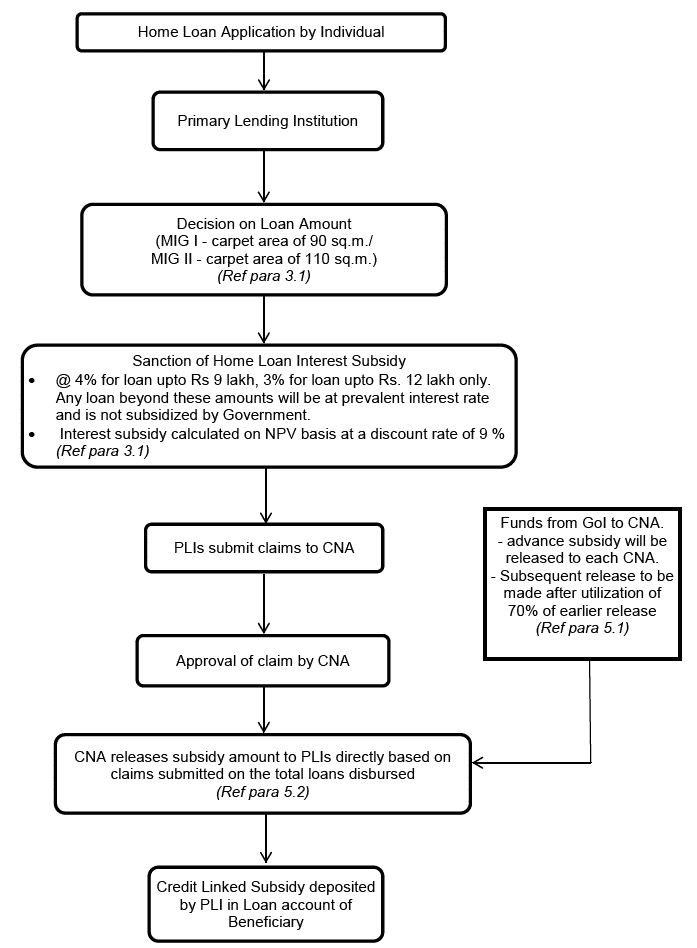 The government has also increased the loan tenure of the CLSS for EWS/LIG from 15 years to 20 years.

The home loans subsidy under CLSS scheme of PMAY will be processed through the Central Nodal Agencies. Below are the contact & helpline details of the CNA’s
National Housing Bank (wholly owned by Reserve Bank of India)
Core 5-A, India Habitat Centre, Lodhi Road, New Delhi 110 003
CLSS Tollfree No: 1800-11-3377; 1800-11-3388
E-mail: clssim@nhb.org.in

The assessment applications for PMAY-U are being invited through the online mode through official website pmaymis.gov.in of PM Awas Yojana.