Central govt. has announced the launch of Pradhan Mantri Shram Yogi Maandhan Yojana in the Union Budget 2019-20. Under this PM Shram Yogi Maandhan Scheme 2019, govt. will provide Rs. 3,000 pension to all the unorganized sector workers. For this pension amount under PMSYM, labourers will have to make certain contribution. So before getting enrolled in this PM Shram-Yogi Mandhan Yojana, check pension chart of contribution to be made, eligibility criteria and complete details.

The direct benefit pension scheme for unorganized sector labourers namely PM Shram Yogi Maandhan (PMSYM) Scheme is going to be launched on 15 February 2019. People with less than Rs. 15,000 monthly income can contribute fixed monthly amount (as in pension chart) till the age of 60 years while an equal amount would be put by the central government.

On attaining the age of 60 years, all the registered workers will start getting pension amount for lifetime.

PMSYM scheme is similar to the EPF scheme for the workers in the organized sector in which 12% of basic salary goes into employees provident fund while an equal contribution is made by the employer. The idea to launch PM Shram Yogi Maandhan Yojana is to let workers of unorganized sector to save towards their retirement also. PMSYM is open only for all those workers in unorganized sector whose age is between 18 to 40 years. 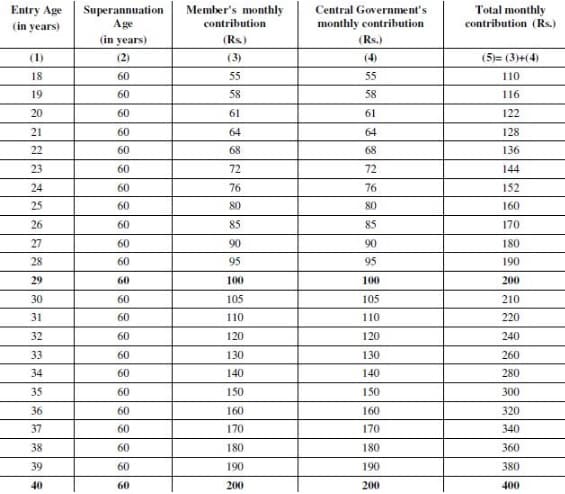 The amount which any worker has to contribute monthly is based on the age and has to be paid till they attain the age of 60 years (check pension chart below). The same contribution will be made to the individuals PMSYM account every month. After attaining the age of 60 years, govt. will provide fixed monthly pension of Rs. 3,000 till lifetime duration of an individual.

In case the death occurs during the pension period, then the spouse would start getting family pension. This pension amount would be equal to half of what was being paid to the individual. On death of subscriber and his / her spouse, the corpus would be credited back to the Pension Fund of the government.

All the candidates who wants to make registration or wants to apply for the PMSYM scheme must check the eligibility first. Pradhan Mantri Shram Yogi Maandhan Scheme is open to all unorganized sector workers whose monthly income is less than Rs. 15,000 per month. Moreover, applicants must possess a savings bank account and aadhaar number.

PMSYM Yojana 2019 is an age based pension scheme which is completely dependent on the starting age of PMSYM subscriber. Someone who is 30 years of age will have to make monthly contribution of Rs. 105 till the age of 60 years. In that case, an individual has paid Rs. 37,800 and an equal amount is contributed by the central government.

This PM Shram-Yogi Maandhan Yojana is a mega pension scheme aims at welfare of unorganized sector workers. So, people must inform and guide workers to take advantage of this PMSYM scheme. With IMPS and other digital payments mode, people may even consider starting making contributions on behalf of the individuals working for you.

Related Content
« Assam Mukhya Mantri Krishi Sa-Sajuli Yojna (CM Farm Tool Scheme) for Farmers
छत्तीसगढ़ मुख्यमंत्री ज्ञान प्रोत्साहन योजना 2019 – आवेदन फॉर्म, SC/ST/OBC विद्यार्थियों की सूची »
VIEWS:
Disclaimer & Notice: This is not the official website for any government scheme nor associated with any Govt. body. Please do not treat this as official website and do not leave your contact / personal such as Aadhar Number or Mobile No. information in the comment below. It is not possible for us to reply to each comment/query, neither we can address the complaints regarding any scheme. We request all our visitors to visit the official website of the concerned department / authority for any complaint, query about the scheme / information published on this website.