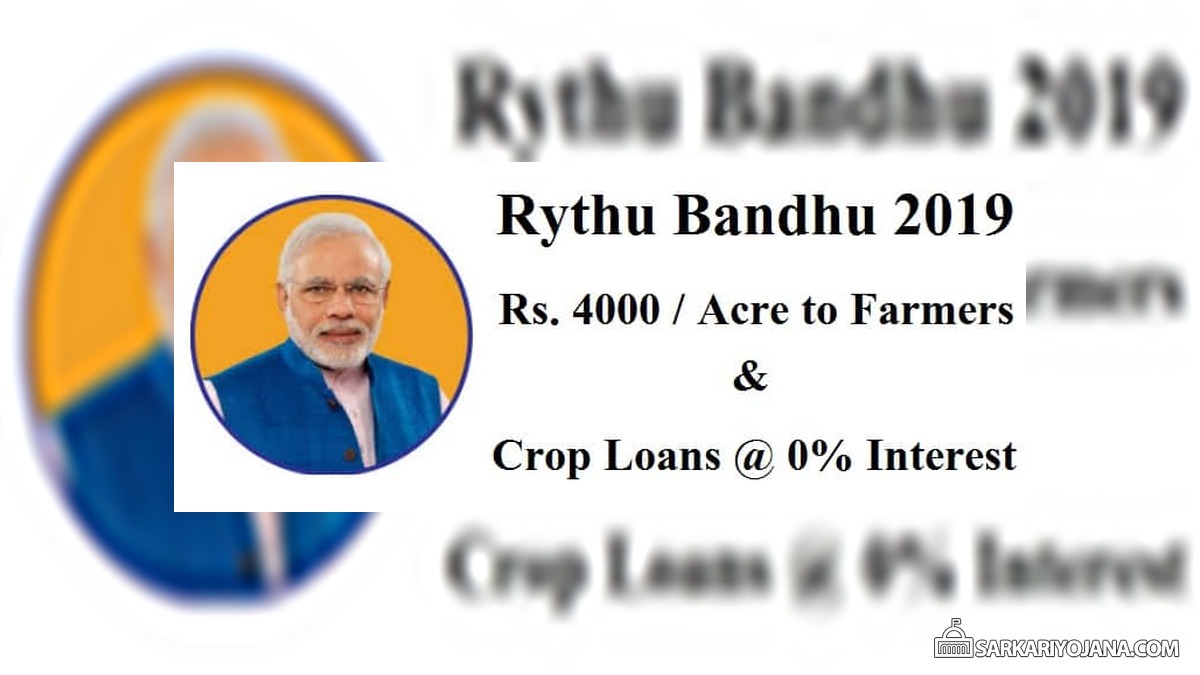 Central government is likely to announce PM Modi’s new scheme named as Rythu Bandhu Scheme 2019 for farmers. Under this direct benefit transfer (DBT) scheme, govt. will provide Rs. 4,000 per acre per crop per season per year to farmers. In this investment support scheme, the govt. will transfer the amount directly into the bank account of the small and marginal farmers.

The primary objective is to reach and provide the scheme benefits to the last farmer in the country. This direct transfer will reduce the need of middlemen and thus will also curb corruption. The scheme is going to add an additional burden of around 2.3 lakh crore on the central government.

Modi said in his interview on 1 January 2019, that there is a no need for farm loan waiver as this is just a lollipop and its benefits are restricted only to prosperous farmers and the needy ones are left alone. So, there is a need for income support scheme which would not only makes farmers self reliant but will also prevent them to become a part of the debt trap. To achieve these objectives, govt. may soon launch Rythu Bandhu Scheme 2019 under which each farmer will get Rs. 4000 per acre each for Kharif crops and Rabi crops.

Moreover, those farmers who are income less and are not performing farming on their agricultural land would also get included in this direct benefit transfer scheme. In addition, govt. will also provide crop loans at 0% interest rate. This Rythu Bandhu Scheme 2019 will cost the central govt. around Rs. 2 lakh crore towards DBT and interest subvention scheme for crop loans will cost around Rs. 28,000 to Rs. 30,000 crore.

Both these schemes will add upto Rs. 2.3 lakh crore on an annual basis. At-least, around Rs. 70,000 crore fertilizer subsidy scheme would be subsumed into this scheme and some other smaller schemes may also get subsumed. The Modi led NDA govt. is in hyper active mode to appease the aggrieved farmers community. It is expected that the benefits of these 2 schemes would reach the intended beneficiaries.

Various meetings are held at the PM’s Office and NITI Aayog and the govt. is likely to finalize the announcement within this week. Several officials of the nodal ministries like agriculture, revenues, expenditure, chemical and fertilisers, food, etc have been asked to meet informally to remove any faults in this scheme. Moreover, PM Modi is meeting farmer leaders to discuss these proposals and bring an out-of-box solution to farmers distress.

Till date, farmers are getting crop loans at subsidized rate of 4 percent only. Under this crop loan interest subsidy scheme 2019, banks will not charge any interest on loans upto Rs. 1 lakh. In 2017-18, central govt. has setup target of distributing loans worth Rs. 10 lakh crore and it has been achieved. Around 70% of the loans had been distributed as crop loans but with farmer loan waivers, banks have started extending crop loans.

The new scheme will open up new avenues for farmers and would reduces the input cost. This scheme will benefit the farmers to a huge extent in the near future but mounting bad debts are still a worry. The combined figure of bad debts from all the banks currently stands at Rs. 3 lakh for agriculture sector.

This DBT scheme is going to allow the central govt. to transfer the subsidies directly into the bank accounts of the farmers. Accordingly, the need of manufacturers and traders which serve as middlemen would get reduced.
DBT Scheme Working – During the sale of agri inputs, complete details of the buyer including Aadhaar details, the quantity, land records would be captured using a point of sale (POS) machine. The central govt. will transfer the benefits of Rs. 4,000 per acre per season per crop per year. This model is similar to the Telangana state flagship scheme named as PM Modi’s Krishak Bandhu Scheme under which govt. transfers Rs. 4,000 per acre into the farmers account at the beginning of the crop season. DBT for fertilisers has already begun in several states this year.

Central govt. has allocated Rs. 70,000 crore towards the subsidy on fertilisers. Currently, DBT is working differently with limited role of the manufacturers. But after the implementation of Modi’s Rythu Bandhu Scheme 2019, the scheme will reach the actual beneficiaries.

The 3rd difficulty in Investment Support Scheme implementation is that the central govt. wants that the burden of the scheme should be borne in the 70:30 ratio. But the states wants that the entire burden of the PM Modi’s Direct Benefit Transfer Scheme for farmers is borne by the central government. In states like Telengana, Odisha, Andhra Pradesh, Karnataka and West Bengal where BJP govt. is not there and similar investment support schemes are already running, the implementation of this PM Modi’s Income Support scheme is difficult.