Lucky Draw Yojana is a new scheme announced by think-tank NITI Aayog to promote use of cashless digital payment methods among consumers. The government has announced daily, weekly and mega awards for the consumers using digital payments for any kind of payment.

Along with this, NITI Aayog has also announced Digi-Dhan Vyapar Yojana for merchants to encourage them to accept payments digitally.

Both the schemes will cover digital transactions between Rs. 50 to 3000. Under the Lucky Draw Yojana award scheme, first draw will be held on 25 December and mega draw on April 14, 2017. The focus of both the schemes would be to cover poor, middle class and small businesses and bring them under the digital payments revolution. 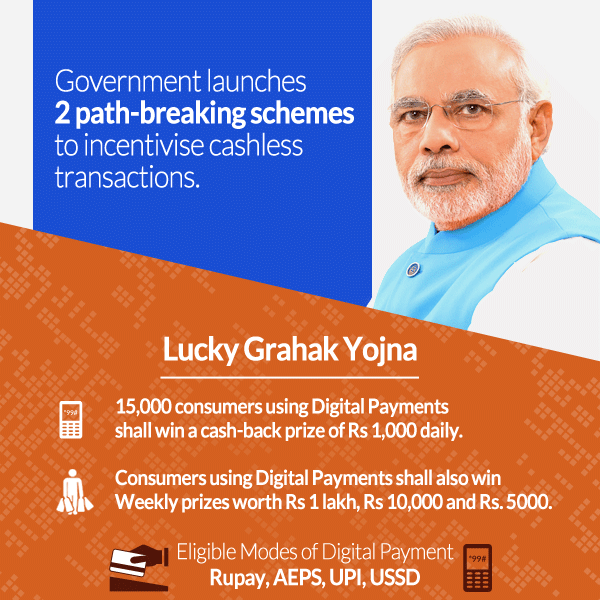 The schemes would be implemented under the National Payments Corporation of India.

Under the Lucky Grahak Yojana, the government would provide cashback prize of Rs. 1000 to 15000 winners each every day starting from 25 December to 14 April 2017.

There will be a random draw of digital transactions ID’s generated through all forms of transactions including UPI, USSD, AEPS, and Rupay cards.

The scheme would not be applicable for transactions done through private credit cards and e-wallets of privately owned companies.

There are 16 comments on this article | leave a replyTags: Cashless India, Narendra Modi Schemes 2016

Rajesh Kumar at Sarkari Yojana
Related Content
10 Cashless Digital Payments Methods for Cashless India Digi Dhan Vyapar Yojana Cashback Award Scheme for Merchants
Disclaimer and Notice: This is not the official website for any government scheme nor associated with any Govt. body. Please do not treat this as official website and do not leave your contact / personal such as Aadhar Number or Mobile No. information in the comment below. It is not possible for us to reply to each comment/query, neither we can address the complaints regarding any scheme. We request all our visitors to visit the official website of the concerned department / authority for any complaint, query about the scheme / information published on this website.