Ration Card is an essential document in Karnataka for the APL / BPL people to take benefits of most govt. schemes. It is important to note that ration card holders only can purchase Ration at subsidized rates from Ration Shops located nearby.

All the candidates who had previously applied for the new ration card now check their name in Karnataka ration card list 2019 for NFSA beneficiaries as per the procedure below:- 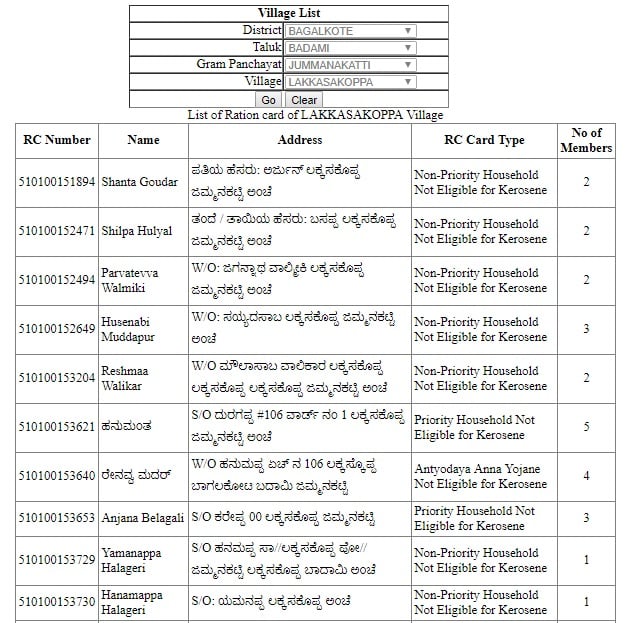 All the candidates can perform manual searching in the new village wise ration card list Karnataka.

— For more details, visit the official website at ahara.kar.nic.in

There are 2 comments on this article | leave a replyTags: Ration Card, Sarkari List

Related Content
« मुख्यमंत्री कन्या सुरक्षा योजना हेतु आवेदन पत्र 2019 पीडीएफ़ फॉर्म / बेटियों के लिए 2,000 रूपये वित्तीय सहायता
Jammu & Kashmir Ration Card Application Form PDF Download Online »
VIEWS:
Disclaimer & Notice: This is not the official website for any government scheme nor associated with any Govt. body. Please do not treat this as official website and do not leave your contact / personal such as Aadhar Number or Mobile No. information in the comment below. It is not possible for us to reply to each comment/query, neither we can address the complaints regarding any scheme. We request all our visitors to visit the official website of the concerned department / authority for any complaint, query about the scheme / information published on this website.