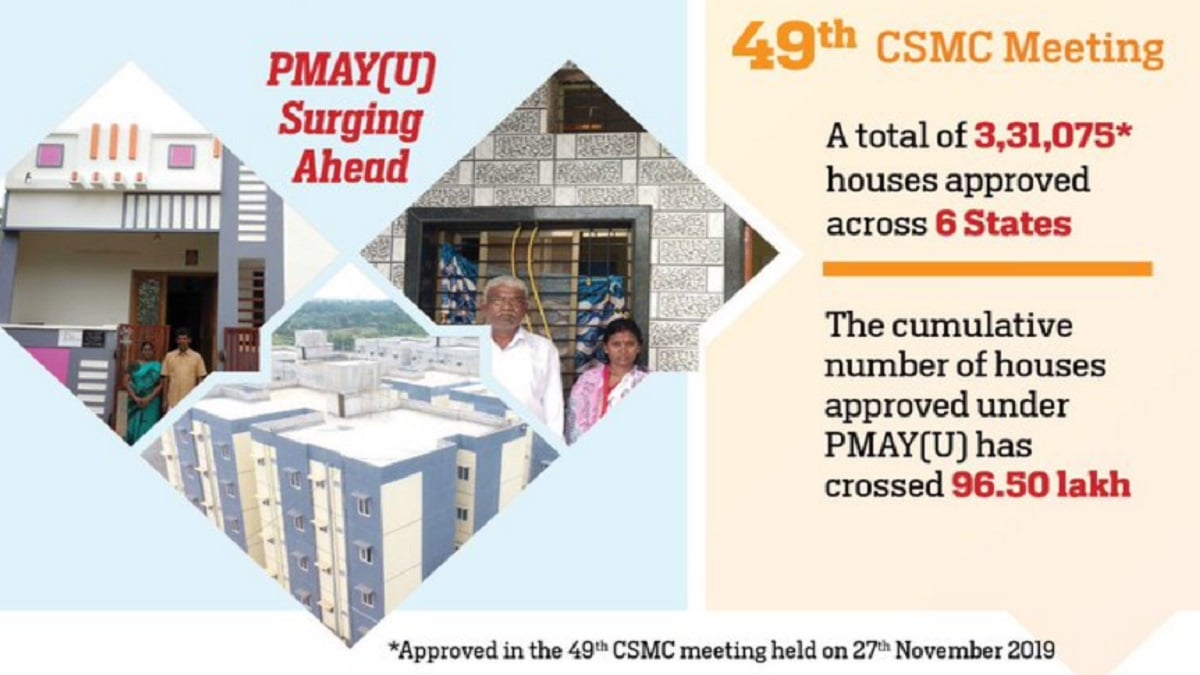 In CSMC 49th meeting, a total number of 606 proposals have been approved in 6 states across BLC / AHP verticals. The total project cost is Rs. 15,125 crore with central assistance of Rs. 5,092 crore. This includes 6 Light Houses Projects (LHPs) for construction of 6368 houses to be built across 6 States.

The number of houses approved (state-wise) under PMAY Urban in the 49th CSMC meeting held on 27 November 2019 are as follows:-

More than 56 lakh houses have been grounded and construction of 28.4 lakh houses has been completed & handed over to PMAY-U beneficiaries. After subsuming projects of Rajiv Awas Yojana (RAY) Scheme, the total number of houses sanctioned for urban poor under PM Awas Yojana Urban (PMAY-U) is now more than 96.50 lakh.

Central Assistance of ₹5,092 crore has been sanctioned for 6 states in the 49th CSMC meeting today.#HousingForAll pic.twitter.com/4lgbTk9Zmh

Investment of ₹15,125 crore has been approved for 6 states in the 49th CSMC meeting on 27th November 2019.#HousingForAll pic.twitter.com/CzaiG724Tz

Karan Chhabra at Sarkari Yojana
Related Content
GST Latest News – Online Lottery Scheme (Daily / Monthly) for Customers Paying GST नई मोबाइल एम-आधार कार्ड ऐप डाउनलोड करें / देखें नयी जोड़ी गई सेवाएँ
Disclaimer and Notice: This is not the official website for any government scheme nor associated with any Govt. body. Please do not treat this as official website and do not leave your contact / personal such as Aadhar Number or Mobile No. information in the comment below. It is not possible for us to reply to each comment/query, neither we can address the complaints regarding any scheme. We request all our visitors to visit the official website of the concerned department / authority for any complaint, query about the scheme / information published on this website.